Been Around a Long Time - Old-School Hydrogen Production and Demand, and Why It Matters
Get our Daily Blog Email

European natural gas consumers would welcome the addition of low-cost liquefied natural gas (LNG) from the U.S. to their gas-supply mix. For one thing, they want to reduce their reliance on Russia and other potentially sketchy sources of pipeline gas. For another, they want to weaken the link between oil and gas pricing—something U.S.-sourced LNG would help them do. What would it take for the U.S. to become one of Europe’s primary gas suppliers, and what would that mean for U.S. gas producers and LNG exporters? Today we continue our examination of the international LNG market with a look at what’s driving European curiosity about U.S. LNG.

The U.S. and European natural gas markets are about as similar as U.S. football and European football (known to those of us on the western side of the Atlantic as soccer). Within the Lower 48, U.S. gas pipelines are highly interconnected, gas pricing and trading is hub-based—and, it’s worth noting, virtually all of the gas consumed in the U.S. is sourced domestically or from Canada, a highly reliable and politically stable trading partner. Europe, on the other hand, depends on far-away sources for much of its gas (about 30% is piped in from Vladimir Putin’s Russia), and it developed its first gas trading hub less than 20 years ago (the British National Balancing Point, or NBP, in 1996). Even now, spot gas trading sets the price for little more than half of all the natural gas Europeans consume. The price for almost all the rest (40% or so, by most estimates, including most Russian gas) is based on long-term contracts indexed to oil prices. There are a lot of historical reasons for this, including the facts that the UK and Norway (two of Europe’s three primary sources of native gas—Holland is the third) for years were not connected to the rest of Europe by gas pipelines. Also, for centuries before the formation of the European Union (EU) in 1993, each European country was pretty much a market of its own. Things have been changing, though. New pipelines have been built (and more are planned), new trading hubs have been started up (including the Title Transfer Facility in 2003, the Central European Gas Hub in 2005, and the Net Connect Germany and Gaspool hubs in 2009), and more than 20 LNG import terminals have been developed throughout Europe (green dots in Figure 1) to receive liquefied gas from Qatar, Algeria, Nigeria and other suppliers. More import terminals are under construction (yellow dots) or planned (red dots). 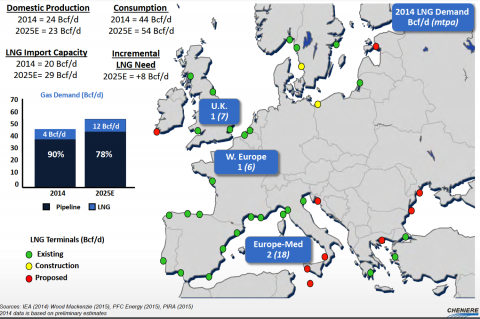 As you may recall, we began our look at the worldwide LNG market in Episode 1 with a look at the market’s evolution, and at the continued dominance of long-term supply deals (at least in Asia, but elsewhere too). Next, in Episode 2, we discussed the major catalysts shaking up the LNG trade (more LNG capacity coming online; LNG export deals with fixed liquefaction tolls and gas costs linked to Henry Hub; the oil-price decline and its effect on oil-indexed LNG prices; the roll-off of long-term LNG supply deals; the increasing share of LNG capacity available to the spot market; and the recent slump in Asian LNG demand-and prices that have occasionally made Europe a more attractive market for spot LNG sales). Then we looked at existing and future demand in key Asian markets, starting with emerging LNG importing giants China and India (Episode 3) and then with current leaders Japan and Korea (Episode 4) and the rest of the Asian pack (Thailand, Singapore, the Philippines, Vietnam etc.; Episode 5). In Episode 6, we discussed the various ways major Asian consumers of LNG are trying to bring down their energy costs (forming LNG-procurement alliances, reaching deals to pipe in gas from Russia and elsewhere, talking up plans for more nuclear generation). We also mentioned Singapore’s long-shot effort to establish an LNG trading hub—an attempt to make the Asian LNG market more like its European counterpart. And most recently, in Episode 7, we turned our focus to Europe. There, we noted that Europe meets about 10% of its gas needs with LNG--it imported 32 metric tons per annum (MTPA) of LNG in 2014, the gas equivalent of 4.1 Bcf/d, and LNG imports to Europe are expected to more than double by 2025 and more than triple by 2035. Some say a tripling of European LNG imports could come as soon as the mid-2020’s.

To access the remainder of A Whole New World—Why Europe Needs U.S.-Sourced Natural Gas you must be logged as a RBN Backstage Pass™ subscriber.