The pace of liquefied natural gas (LNG) demand growth in Asia will be a critical factor in determining how much natural gas North American producers export over the next 10 to 20 years, and gas/LNG export levels are sure to affect U.S. and Canadian gas production levels and prices. Last year's pause in Asian LNG demand growth--combined with a collapse in LNG prices--led many to wonder, where is all this heading, and what does it mean for gas producers and LNG exporters? Today, we continue our review of the fast-changing international LNG market with a look at Asia's burgeoning gas needs and how they will likely be met.

Of the 4,023 worldwide LNG shipments made in 2014, 2,886 (or 72%) were to Asian ports—and more than half (1,524) were to Japan, which is by far the largest consumer of LNG (see Spouse of the Rising Sun). Asian markets also represent the future of the LNG trade; the vast majority of the growth in worldwide LNG demand is expected to occur there, most of it in China and India and as a bunker fuel for ships plying the region’s waters (see Yo Ho Ho And A Cargo of Bunkers). As we’ll get to, LNG demand growth in China is the biggest wild card. Figure #1 shows a recent (March 2015) Asian LNG demand forecast based on data from the International Energy Agency (IEA). LNG demand is shown by country except for bunkers (light blue) and the values are quoted in billion cubic meters per annum (BCMA – for reference 250 BCMA = 24 Bcf/d). Chinese demand is expected to grow rapidly but the forecast shows two scenarios – a low case (light green layer near the top of Figure #1) and a high case (light green plus dark green layers). Which of these scenarios proves more likely depends on several factors, chief among them how much natural gas China gets delivered by pipeline from nearby regions of mainland Asia. 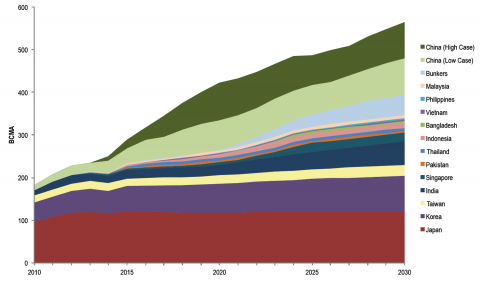 In Episode 1 of our international LNG market series, we discussed the evolution of LNG pricing—at first prices were fixed, but starting with the OPEC oil crisis in 1973-74 (when oil prices soared, putting LNG at a steep discount) oil and LNG prices were contractually linked, with the goal of mitigating the risks faced by LNG buyers and sellers—and the developers of capital-intensive LNG export facilities. In Episode 2, we looked at five major catalysts shaking up the LNG trade: 1) New LNG capacity coming online, mostly in Australia and the U.S.; 2) Fixed liquefaction tolling agreements being offered by U.S. LNG developers and natural gas costs tied to fixed price index percentages (typically 115%) of the U.S. Henry Hub, LA benchmark price; 3) The collapse in oil prices and the resulting drop in oil-indexed LNG prices; 4) The roll-off of long-term LNG supply deals and the increasing share of LNG capacity available to the spot market; and 5) The recent slump in Asian LNG demand-and prices--that have occasionally  made Western Europe a more attractive market for spot LNG sales. We also discussed how these catalysts are forcing LNG sellers, buyers and shippers to be more flexible, nimble and creative. Examples of this include LNG buyers seeking to rework oil-indexed deals to shrink the often-yawning gap between current contract prices and spot market prices, or forming joint ventures (JVs) to gain more leverage. (The JV between Japan’s Tokyo Electric Power Co. and Chubu Electric Power is a recent example.) Also LNG buyers have been working to incorporate in their contracts destination flexibility—that is, the ability to divert LNG shipments to any destination the buyer wants—as well as the ability to resell surplus cargoes to others.

To access the remainder of A Whole New World--Asian LNG Demand and North American Gas Production you must be logged as a RBN Backstage Pass™ subscriber.