How the international market for liquefied natural gas (LNG) expands and evolves is of critical importance to U.S. and Canadian natural gas producers and midstream companies alike. The success of North American-sourced gas in penetrating LNG demand centers--Asia and Europe in particular—will help determine not only how much gas needs to be produced, but how much incremental pipeline and liquefaction/LNG export capacity needs to be developed, and how much upward pressure there will be on U.S. and Canadian natural gas prices. There is a lot of uncertainty about how things will shake out. Today, we conclude our series with an assessment of what we know, what we aren’t sure about, and what we think we’re likely to see happen.

Given all that’s going on in the energy world, it’s not surprising to see the international LNG market in a state of flux. Consider this: Demand for LNG has plateaued in Asia (by far the largest market for LNG, led by Japan and South Korea) due to a combination of milder-than-normal weather, slower economic growth, renewed competition from nuclear, and lower-cost power from oil and coal. Also, the biggest Asian growth markets (China and India) are looking to pipe in natural gas from their neighbors (Russian/Siberian gas into China, for instance) as a lower-cost alternative to LNG. Europe, meanwhile, is concerned about relying too heavily on piped-in gas from Putin’s Russia, and is considering its gas-supply options too—including, as of late, piped-in gas from Iran. All of this comes as a flood of new liquefaction/LNG export capacity is poised to enter commercial operation (most of it in Australia and the U.S.; see blue and lime-green layers in Figure 1), and as major LNG consumers are trying to move away from long-term LNG supply deals indexed to oil prices and toward shorter-term and spot deals, prices tied to spot natural gas (as U.S. LNG exporters are offering), and—very important—“destination flexibility” to allow LNG to be shipped wherever the liquefaction off-taker wants. 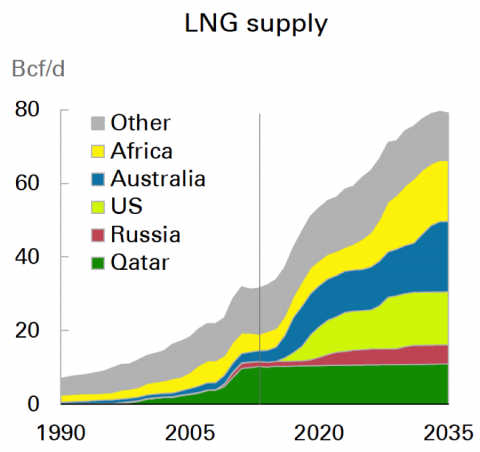 We’ve reviewed the evolving LNG market from a number of angles in this series. In Episode 1 we looked at the market’s evolution, and at the continued dominance of long-term supply deals (at least in Asia, but elsewhere too). Next, in Episode 2, we discussed the major catalysts shaking up the LNG trade (more LNG capacity coming online; LNG export deals with fixed liquefaction tolls and gas costs linked to Henry Hub; the oil-price decline and its effect on oil-indexed LNG prices; the roll-off of long-term LNG supply deals; the increasing share of LNG capacity available to the spot market; and the recent slump in Asian LNG demand-and prices that have occasionally made Europe a more attractive market for spot LNG sales). Then we looked at existing and future demand in key Asian markets, starting with emerging LNG import giants China and India (Episode 3) and then with current leaders Japan and Korea (Episode 4) and the rest of the Asian pack (Thailand, Singapore, the Philippines, Vietnam etc.; Episode 5). In Episode 6, we discussed the various ways major Asian consumers of LNG are trying to bring down their energy costs (forming LNG-procurement alliances, reaching deals to pipe in gas from Russia and elsewhere, talking up plans for more nuclear generation). We also mentioned Singapore’s long-shot effort to establish an LNG trading hub—an attempt to make the Asian LNG market more like its European counterpart. In Episode 7, we turned our focus to Europe, noting that it meets about 10% of gas needs with LNG (importing 32 million tons per annum (MTPA) of LNG in 2014, the gas equivalent of 4.1 Bcf/d), and that LNG imports to Europe are expected to more than double by 2025 and more than triple by 2035. Finally, in Episode 8, we looked at how Europe is now playing the role of swing importer, absorbing much of the low-price, surplus LNG available and, in doing so, helping to balance worldwide supply and demand.

To access the remainder of A Whole New World—Where the LNG Market May Be Headed, and What It Means you must be logged as a RBN Backstage Pass™ subscriber.