The total shutdown of Japan’s nuclear power industry in the wake of the March 2011 Fukushima disaster caused a more than 20% increase in liquefied natural gas imports. In 2015, the first two of the 48 Japanese nuclear units that were taken offline post-Fukushima are expected to be restarted, but it will take several years for most of the rest to come back online—and it’s likely that many nuclear units will never return to service. How much did Fukushima change Japan’s electricity sector, and how will that nation’s fledgling nuclear reboot affect LNG imports, not just from current suppliers like Australia, Qatar and Malaysia but new and prospective suppliers in the US and Canada? Today we begin a look at the electric industry in Japan, the future of nuclear power and LNG use there, and the Japanese-led effort to change how LNG is priced.

NEW !! Houston, We Have a Problem

We have just released our tenth Drill-Down report for Backstage Pass subscribers examining the adequacy of crude storage in the Houston area, including a tabulation of major storage facilities in the region. More information about Houston We Have A Problem here.

Japan was already the world’s leading LNG importer (accounting for about one-third of all LNG imports) in March 2011, when a 9.0 earthquake triggered a tidal wave that devastated Tokyo Electric Power Co.’s six-unit Fukushima Daiichi nuclear station northeast of Tokyo. Within two months of the disaster, most of Japan’s other 48 nuclear units were offline, and by September 2013 all of them were. Given that nuclear power had been providing 30% of Japan’s electricity prior to Fukushima (with fossil-fired units providing almost all the rest), the industry-wide nuclear shutdowns forced wrenching change. Electric customers were asked to slash their power use to ease strain on the grid, and utilities took an all-hands-on-deck approach to generating electricity, maximizing their use of natural gas, coal and oil-fired units to keep the lights on. Gas and oil use to produce power rose the most in 2011 and 2012, but oil use fell in 2013, offset by a rise in lower-cost coal (see Figure #1). Note that LNG-based power generation (blue-shaded area in the bar-chart) accounts for half of the total, and that the pleas by Japan’s government and utilities to curb power use were heeded--electricity consumption in Japan (black line in chart) dropped an impressive 12% in the months after Fukushima and has remained flat since then. 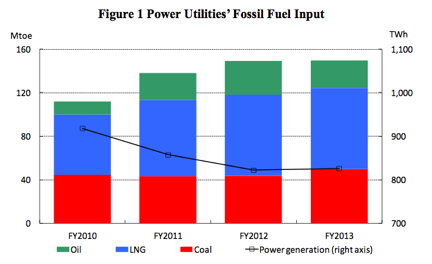 The increased use of fossil fuels for power generation post-Fukushima resulted in a huge uptick in LNG imports (more than 95% of Japan’s gas comes from LNG). According to the Japanese government, in 2010 the LNG equivalent of about 9 Bcf/d of natural gas was imported (with electric utilities accounting for more than 5 Bcf/d of the total). By 2013, LNG imports had soared to the equivalent of 11.5 Bcf/d (with utilities accounting for an even greater share—7.4 Bcf/d—in part because of new gas-fired plants coming online), and in the first eight months of 2014, LNG imports averaged 11.8 Bcf/d. Japan has a stellar LNG import/regasification infrastructure (30 terminals with a total gas send-out capacity of 23 Bcf/d) and can handle the flood of LNG—that wasn’t and isn’t the issue. The problems for Japan are that 1) the fossil-fired units it now depends on for almost all its power (wind, solar and other renewables provide only a sliver) can barely meet demand on days or nights with high power demand, and 2) oil and gas (particularly when it’s supplied as LNG, as it needs to be in Japan) are way more expensive than nuclear fuel (uranium).

To access the remainder of Spouse of the Rising Sun—Japan’s Long, Expensive Marriage to LNG you must be logged as a RBN Backstage Pass™ subscriber.