Sitting on Top of the World - Targa Built a Leading Midstream Platform in the Permian. What's Next?
Get our Daily Blog Email

Over the past few years, midstream companies have responded to the boom in crude oil and lease condensate production in the Eagle Ford and the Permian by developing significant new pipeline capacity to, as well as storage and dock facilities in, both Houston and Corpus Christi. Now, with production in the Eagle Ford off its high and growth in the Permian slowing, these same midstreamers (and producers, marketers, refiners, and exporters of condensate and other refined products) are taking stock, and assessing not only what new infrastructure might still be needed in this period of lowered expectation, but whether shifting more of their attention (and liquids) towards Corpus instead of Houston might be warranted. Today, we continue our look at Corpus Christi’s increasing role as a crude/condensate powerhouse.

Even with the declines in drilling and completion activity we’ve been seeing with lower oil prices, a lot of light crude and lease condensate is still being produced in the Eagle Ford and the Permian Basin. According to the U.S. Energy Information Administration (EIA) drilling productivity report (DPR), crude and condensate production in the Permian is estimated to be just over 2 MMb/d in November 2015 (up slightly from a year ago); production in the Eagle Ford (where the active rig count is flirting with 100—off from an average of 250 in the 2012-14 period) has been sliding of late, and is estimated to be 1.3 MMb/d in the same month. Together that’s a huge 3.3 MMb/d of crude and condensate to move to market.

As we said in Episode 1, Corpus Christi is now a competitive alternative to Houston as a market hub for Eagle Ford and Permian crude and condensate headed to the Gulf Coast. Not only is Corpus close to (and well-connected by pipeline with) the Eagle Ford and connected (to a lesser degree) with the Permian, the city and its environs boast considerable crude/condensate storage, oil-refining and growing condensate splitting capacity, as well as one of the nation’s best and busiest ports. Let’s begin this time with an overview of crude/condensate pipelines out of the two plays to Corpus and Houston. 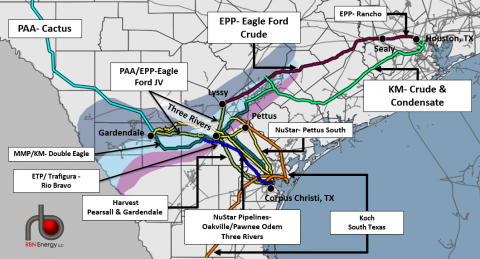 Figure 1 provides the big picture on pipelines out of the Eagle Ford; we’ll get to each of the individual pipelines (and how they fit into the larger whole) a little later. Note that the map shows the Eagle Ford’s three production regions (from top to bottom) the gray/blue oil-production window, the light blue wet gas/condensate window, and the purple dry gas window. The map also shows (in various colors) the spaghetti of crude/condensate pipelines between the Eagle Ford and Corpus; the two primary crude/condensate pipelines between the Eagle Ford and Houston (purple and pale green lines); and (in aqua, out of the upper-left) Plains All American’s (PAA) new 250 Mb/d Cactus Pipeline from McCamey, TX (in the Permian) to Gardendale, TX. As we’ll get to, Cactus already is being expanded (to 330 Mb/d by mid-2016), and several pipeline projects that would add still more capacity from the Permian to the Eagle Ford (and on from there to Corpus) are under consideration. Gardendale, the terminus of the Cactus Pipeline, is one of four major crude/condensate hubs within the Eagle Ford (black dots, bold black type); the three others are Three Rivers, Lyssy and Pettus. As you’ll see, moving crude and condensate to market isn’t always a simple matter of moving from Point A to Point B; instead, it’s often a matter of moving from Point A to points D, then J, then P.

Next, we take a drone’s eye-view look at crude/condensate pipelines from the Permian to Houston—and, because the Cushing, OK hub is another potential destination, at Permian-to-Cushing pipelines too.