In the new world where unencumbered crude exports are permitted, Corpus Christi holds a lot of strong cards as a major hub for shipping crude oil and lease condensate to international markets. Crude and condensate shipments out of Corpus have gone through the roof since 2012 as production in the close-by Eagle Ford soared. Pipelines offer producers direct routes to marine docks that currently ship crude to domestic refineries but could just as easily serve international customers. Today, we continue our look at Corpus’s emerging role as a crude oil/condensate hub with a review of existing and planned storage and marine dock facilities.

In the fall of 1921, after a day of South Texas deer hunting and several shots of whiskey—true story!--the U.S. Army Corps of Engineers’ district engineer in Galveston told the mayor of Corpus Christi that the Corps had selected Corpus as the site of a new deepwater port. Five years later, a ship channel from the Gulf of Mexico to Corpus had been dredged and the port was in business. The port’s initial focus was on moving cotton, but by the start of World War II--with thousands of new oil wells being drilled in Nueces, San Patricio and other nearby counties, and the first refineries being built along the Ship Channel--the port’s business had shifted largely to petroleum and petroleum products. Fast forward to the shale era. Oil still dominates activity at the port, and much of the Ship Channel is lined by refineries, a condensate splitter, storage facilities, and petroleum-oriented marine docks (see Figure 1). And even with the recent slowdown in Eagle Ford and Permian Basin drilling activity, large volumes of crude and condensate are being shipped out of Corpus. According to outbound commodity data published by the Port Authority, volumes of crude and condensate shipped out of Corpus averaged 680 Mb/d between January and November 2015. That is an amazing five times the average volume shipped in 2012 (136 Mb/d). According to the Corpus Port Authority data, outbound crude and condensate peaked in August 2014 at 757 Mb/d but was still close to 670 Mb/d in November 2015. 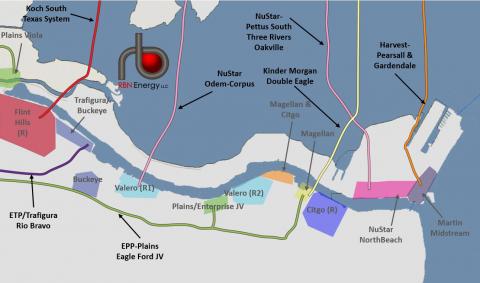 ONEOK Partners - No Sleep Till Bushton

Spotlight is a joint venture between RBN Energy, LLC

Back to Figure 1, which shows which crude/condensate pipelines feed Eagle Ford crude/condensate (and some Permian via the Cactus Pipeline) to which facilities and marine docks along the Ship Channel. We’ll take this on from left to right (west to east):

To access the remainder of Walk This Way—Crude/Condensate Export Dock Facilities Ready to Roll in Corpus Christi you must be logged as a RBN Backstage Pass™ subscriber.