Surging natural gas production volumes in the Marcellus/Utica will need to move in just about every direction. No single market—not the Northeast, the Midwest, the Southeast, or even the Gulf Coast—is big enough to absorb it all. Midstream companies are considering every cost-effective way to replumb and expand their existing pipelines to add takeaway capacity, and when still more is needed, are turning to greenfield projects. In this, the first of several company-by-company episodes on who is planning what, we examine Spectra Energy’s plans to add at least 2 Bcf/d of new Marcellus/Utica takeaway capacity by 2017, and maybe another 2 or 3 Bcf/d by the end of the decade.

In Part 1 of this series, we recapped how quickly gas production has been growing in the Marcellus/Utica (from 2 Bcf/d in 2010 to more than 15 Bcf/d now and an estimated 22 Bcf/d by 2019), and how the regional and interregional pipeline network has been playing a very challenging game of catch-up. Production in the “dry gas” area in northeastern Pennsylvania (now at 7.8 Bcf/d) is set to rise to 10.6 Bcf/d within five years, but production in the “wet gas” areas of southwestern Pennsylvania, eastern Ohio, and West Virginia is expected to grow even faster—doubling from the current 3.5 Bcf/d to 7.7 Bcf/d by 2019. We also noted that a lot of the initial push on increasing takeaway capacity involves moving gas from northeastern Pennsylvania into New York, New Jersey, New England and Ontario (and moving NGLs out of the Utica and the wet Marcellus areas). In this series we will provide brief updates on projects we introduced in blogs over the past several months, including a number still under development.  But we will primarily focus on newer projects—many which involve making existing pipelines bi-directional to move large volumes of Marcellus/Utica gas to LNG export facilities planned for the Gulf Coast. We begin with a review of Spectra’s plans, which as Figure #1 shows, include projects that encircle the Marcellus/Utica and will have effects as far south as Louisiana. 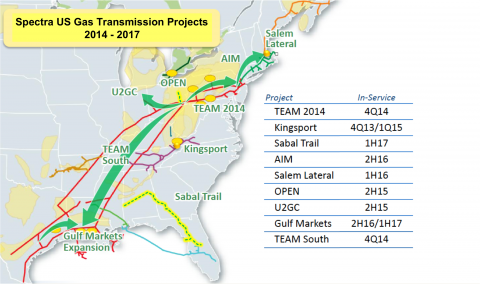 As we said in Gulf Coast Gas, We Don’t Need Ya Anymore—Spotlight on Spectra more than a year and a half ago, the company’s initial efforts in this space focused on moving Marcellus/Utica gas into nearby markets in the Northeast. Spectra owns Texas Eastern Transmission (TETCO)—one of the old-style Gulf Coast-to-market mainlines—and Algonquin Gas Transmission (AGT), which picks up where TETCO leaves off in New Jersey and moves gas into New England. Two of the company’s biggest Marcellus/Utica-related projects were its New Jersey-New York Expansion project (completed last fall; see Another Gassy Day in New York City—The New Gas Pipelines), and Texas Eastern Appalachia to Market (TEAM) 2014. The latter - now under construction and expected to come online in November (2014) - is one of several related efforts by Spectra to repurpose TETCO from the Marcellus/Utica region to the Gulf Coast to allow bi-directionality and the southward flow of 600 MMcf/d along the mainline. Next up is TEAM South, a modest-cost (less than $50 million) effort that by November (2014) will allow up to 300 MMcf/d to flow south from TETCO’s Zone M2 west of Uniontown, PA to its Zone ELA in Mississippi. A more capital-intensive project, the $500 million Ohio Pipeline Energy Network (OPEN), will consist of 76 miles of new 30-inch-diameter mainline pipeline from the Kensington processing plant in the heart of the Utica in Columbiana County, OH (the top of the short blue arrow in Figure #2 below) to an interconnection with TETCO’s system at Clarington, OH, as well as reverse-flow modifications at existing compressor stations along TETCO’s mainline in Ohio, Kentucky, Mississippi and Louisiana. The fully subscribed, 550 MMcf/d OPEN project will begin operation in the second half of 2015.

To access the remainder of They Long to Be Close to You—Spectra’s Plans to Move Marcellus/Utica Gas you must be logged as a RBN Backstage Pass™ subscriber.