Natural gas production in the Marcellus/Utica region continues to increase sharply. Appalachian gas is already dominating markets in the Northeast – helped by a series of infrastructure projects already largely in place or underway. Now producers in Pennsylvania, Ohio and West Virginia need to reach additional customers to their south and west--including potentially the biggest prize of all, the LNG export terminals being developed on the Gulf Coast. Gas pipeline takeaway capacity out of Marcellus/Utica has been added in fits and starts to date, but the need for new southern and western outlets for gas from the region is now evident, and midstream companies are planning long line, bi-directional projects with a combined capacity of more than 9 Bcf/d. In this new series, we consider this next round of pipeline projects out of the Marcellus/Utica.

We begin with a brief recap of how quickly gas production has grown in Marcellus/Utica, and how the regional and interregional pipeline distribution network has had to play a very challenging game of catch-up. As recently as 2010, gas production in Pennsylvania, West Virginia and Ohio totaled less than 1.7 Bcf/d (according to projections from Bentek) ; this month (May 2014), production in the three-state region is expected to average 14.6 Bcf/d, and by 2019 it is expected to grow by another 33%, to almost 22 Bcf/d, as shown below in Figure #1.. The strongest growth since 2010 has occurred in the “dry gas” area in northeastern Pennsylvania where only 270 MMcf/d was being produced in 2010, but 7.8 Bcf/d—yes, nearly 30 times as much—is now being produced, a figure expected to increase to 10.4 Bcf/d by 2019. Production over the next few years is expected to rise even faster in the “wet gas” areas (wet refers to the gas’s high concentrations of natural gas liquids) of southwestern Pennsylvania, eastern Ohio, and West Virginia. In those areas, production has risen from 530 MMcf/d in 2010 to 3.5 Bcf/d now, and is expected to more than double over the next five years, to 7.6 Bcf/d by 2019. 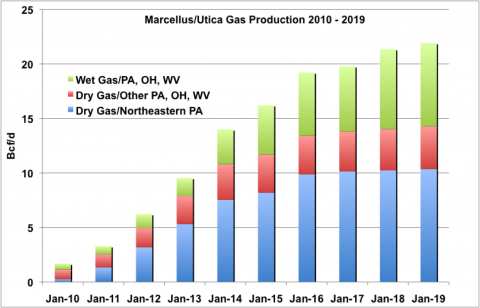 Before the shale gas boom (as we pointed out in Upside Down—Natural Gas Pipeline Backhauls, Reversals and Null Points), the major US demand centers in the Northeast, Midwest and Southeast, turned to far-away suppliers for their gas needs, including producers along the Gulf Coast and in the Midcontinent, western Canada and the Rockies, as well as LNG imports. Thousand-mile-plus pipeline systems like Columbia Gas, Transco, Tennessee, Texas Eastern and ANR Pipeline linked these producers to demand centers – typically flowing south to north or west to east. All that is changing now because Marcellus/Utica shale gas production closer to demand centers has displaced supplies from further afield. For the past three or four years, the midstream sector has been busy re-plumbing the existing infrastructure to accommodate this new reality. RBN has covered a number of these projects – initially aimed at redistributing Marcellus gas within the Northeast region (see Figure #2 below). For example, in the Return to Sender series (see Return To Sender Part 5 for links to each episode) we covered the infrastructure additions and expansions being made to facilitate increased flows of gas from the Marcellus into Ontario and New York - forcing out western Canadian gas previously feeding these markets. And in Another Gassy Day in New York City, we explained how several major pipeline projects provided a one-third increase in the volume of gas that can be delivered to the New York City area – much of it from the Marcellus. 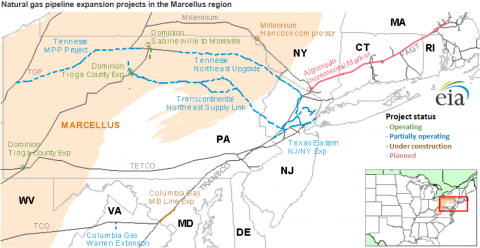 In this series, we will provide brief updates on most of the Marcellus/Utica-related pipelines talked about in previous blogs, but our focus will be on newer projects now under development, designed to move Marcellus/Utica gas west to the Midwest, and south to the Southeast/Texas/Louisiana Gulf Coast region.

As was the case with the first round of Marcellus/Utica-related pipeline projects, the newer plans include a mix of project types: bi-directionality efforts, expansions of existing pipelines, and entirely new pipelines, most of them laterals from existing mainlines. The primary focus of these projects is to reverse the flow of  existing long-distance, large-diameter mainlines (the Rockies Express, the Gulf Coast Mainline, the Southeast Main Line and Transco, to name a few) to move large volumes of gas in directions opposite to the lines’ original intent. Open seasons to attract shipper support for these projects so far show strong levels of interest and support. That is not surprising, given the need for Marcellus/Utica producers to develop access to new markets for their gas—especially LNG export facilities and gas-fired power plants, but also major industrial projects being developed in part to take advantage of abundant, low-cost gas.

To access the remainder of They Long to Be Close to You—Moving Marcellus/Utica Natural Gas South and West you must be logged as a RBN Backstage Pass™ subscriber.