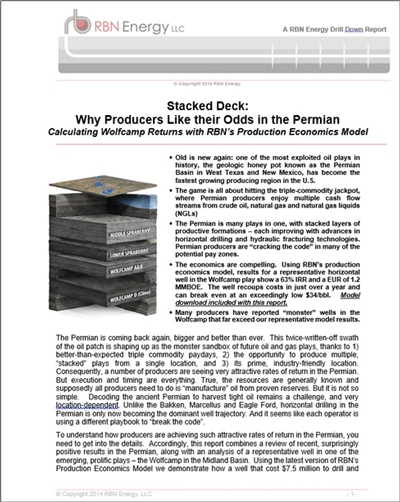 The Permian is coming back again, bigger and better than ever. This twice-written-off swath of the oil patch is shaping up as the monster sandbox of future oil and gas plays, thanks to 1) better-than-expected triple commodity paydays, 2) the opportunity to produce multiple, “stacked” plays from a single location, and 3) its prime, industry-friendly location. Consequently, a number of producers are seeing very attractive rates of return in the Permian. To understand how producers are achieving such attractive rates of return in the Permian, you need to get into the details. This report does that using the latest version of RBN’s Production Economics Model, which demonstrates how a well that costs $7.5 million to drill and complete can generate a 63% discounted cash flow rate of return leveraging three commodity revenue streams - in our sample well’s case: 60% oil, 18% gas and 22% NGLs on a BOE basis.

Stacked Deck: Why Producers Like their Odds in the Permian is the sixth in RBN Energy’s Drill Down report series, a suite of twelve reports coming from RBN during 2014 covering many of the key issues expected to impact the markets for crude oil, natural gas and natural gas liquids.