Square One - To Understand the Hydrocarbon Value Chain, Start With The Basics
Get our Daily Blog Email

Exporting large volumes of Western Canadian gas as liquefied natural gas (LNG) would help resolve the region’s growing gas glut. The government of British Columbia has set a goal of having three major LNG export facilities in operation by 2020, and already is counting the money it expects to make in LNG-related taxes. But while more than a dozen liquefaction/export projects are under development in BC, none of them is a sure thing yet, and LNG sales and purchase agreements with utilities and others in the Asia/Pacific region have been slow in coming. Today we begin a series that considers whether our northern neighbor’s chance to supply gas to Japan, China, and South Korea may be Slip Sliding Away.

The situation faced by gas producers in Western Canada is familiar to regular readers of RBN’s blogs. As we said in “Stuck in the Middle” and “More Than a Feeling?” the western provinces of British Columbia and Alberta hold most of Canada’s gas reserves—and almost all of its shale gas. But the old paradigm of Western Canada supplying gas to the US Northeast and Midwest and to Eastern Canada has been largely undone. Under the new regime, Marcellus, Utica and other regionally sourced shale gas has replaced gas from the Canadian West, leaving producers there scratching around for new markets. The most promising alternative (some would say the only good one) would seem to be the export of LNG to the Asia/Pacific region. After all, the thinking goes, Japan, China, South Korea and others need increasing amounts of gas to run their power plants and industrial facilities, Western Canada has gas it is eager to produce and sell, and BC’s coast is far closer to the Far East than the LNG export projects being planned along the US Gulf Coast. 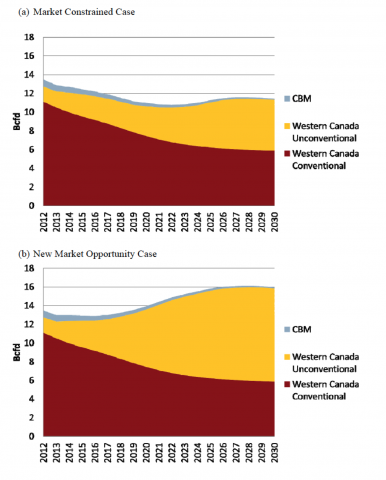 There is no shortage of LNG export proposals in BC. Nine projects totaling 123 MMT of LNG (or 16 Bcf/d of gas) have secured export approval from Canada’s National Energy Board (NEB). Of those, one project (Kitimat LNG) also has received an Environmental Assessment Certificate and five are undergoing their environmental review. Six other LNG export projects have their export applications under review by the NEB, and a handful of other proposals wait in the wings. But as we will see, having NEB export approval in hand (and, in Kitimat LNG’s case, environmental approval too) is no guarantee that a project will advance to financing and construction. For an LNG project to become a reality you need LNG off-take deals—sales and purchase agreements, or SPAs—as well as gas supply agreements with Western Canadian producers, and pipeline capacity from production areas (mostly in remote northeastern British Columbia and western Alberta) to the BC coast. LNG project developers, though, have faced stiff headwinds, particularly in lining up SPAs, and midstream companies planning new pipelines have faced challenges of their own.