Canada’s National Energy Board (NEB) already has approved export licenses for nine LNG export projects in British Columbia that, if all built, would demand a total of up to 16 Bcf/d of Western Canada natural gas. Several other LNG export projects also are under development in BC. In reality, though, at most only a handful of all these projects will be financed and constructed. The BC government’s optimistic estimate is that five liquefaction “trains” with a combined gas throughput of 3.5 Bcf/d (to produce up to 25 million metric tons/year of LNG) will be online by 2023. The questions then are, what will it take for a project to advance, and which developers are making the most headway so far. Today, in the second of our Slip Sliding Away series, we start to assess BC’s top LNG export contenders, including a few late-arriving long shots that could surprise.

As we pointed out in the first episode of Slip Sliding Away, Western Canada needs new markets for its natural gas, particularly if it wants to take full advantage of the large reserves of shale gas waiting to be tapped in the Horn River/Liard basins in northeastern BC and the Montney play in northeastern BC and Alberta. The traditional markets for most Western Canadian gas—the US Midwest and Northeast, and Eastern Canada—have been largely lost to Marcellus/Utica producers, and LNG exports to the Asia/Pacific region are seen as the best hope. But while more than a dozen liquefaction/export projects are under development in BC, none of them is a sure thing yet, and LNG sales and purchase agreements (SPAs) with utilities and others in the Asia/Pacific region have been slow in coming. Last time we listed and described the six primary impediments that the developers of LNG export facilities face: 1) growing but still limited demand for LNG in Asia/Pacific, 2) the “Asian buyers club” intent on reducing LNG prices, 3) the risk of project cost inflation (especially in remote areas like northern BC), 4) the need to build expensive pipeline capacity to move gas to the BC coast, 5) First Nation and environmental concerns, and 6) the likelihood of BC LNG taxes that would further squeeze project economics. With these in mind, we will now consider three LNG projects that each appear to have made at least a little more progress than most of their competitors, and look at the challenges they still have ahead of them.

First, we look at the Pacific NorthWest LNG project, which involves a proposed liquefaction/export facility on Lelu Island in the Port Edward District in northern BC. The 25-year export license granted by the NEB permits the export of up to nearly 20 million metric tons a year (MMTA) of LNG, the gas equivalent of just over 2.7 Bcf/d. The project’s primary sponsor is Petronas, the Malaysian energy giant, which has developed several liquefaction/export and import/regasification projects around the world. Petronas has taken several important steps toward making its Pacific Northwest LNG project a reality. First, in December 2012 it acquired Progress Energy Resources, which has extensive shale and conventional gas holdings in northeastern BC and western and northwestern Alberta. Then, in January 2013, Petronas contracted to have TransCanada Pipelines build and operate the proposed 560-mile Prince Rupert Gas Transmission Project from near Fort St. John in northeastern BC to the liquefaction/export facility in Port Edward (see Figure #1). The initial capacity of the pipeline will be 2 Bcf/d; it could be expanded later to 3.6 Bcf/d. 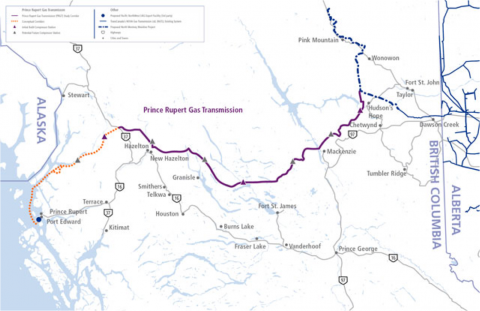 Then, Petronas lined up four Asia/Pacific companies to invest in the LNG project and commit to taking portions of its output. In April 2013, JAPEX Montney, the Canadian subsidiary of Japan Petroleum Exploration, purchased a 10% stake in the Pacific NorthWest LNG project and in Progress Energy Canada’s natural gas assets in northeastern BC. As part of the deal JAPEX also agreed to take 10% of the project’s LNG for a minimum of 20 years for domestic use in Japan. In December 2013 Petronas reached a similar deal (this time for 3%) with PetroleumBrunei; in March 2014 Indian Oil signed a 10% deal, and in April 2014 China Petrochemical (also known as Sinopec) agreed to the biggest investment/LNG off-take deal yet, for 15%, bringing non-Petronas investment stakes in the project to 38%. (Sinopec also signed a binding Heads of Agreement with Petronas for an additional 3 MMT of LNG for 20 years, to be sourced primarily from the Pacific NorthWest LNG project.) The list of Petronas’s accomplishments goes on. In May 2014, Petronas signed a letter of intent (LOI) with the BC government that calls for the parties to negotiate a project development agreement by November 2014. Petronas states in the LOI that it wants certainty on what the LNG tax will be. Finally, Petronas has signed on Societe Generale (SG) as its financial advisor in the pursuit of $10 billion or more in debt financing; SG previously advised Cheniere Energy on its Sabine Pass LNG project, which is now under construction. Petronas expects to make a final investment decision (FID) on the Pacific NorthWest LNG project by the end of 2014. If, as seems likely, the company and its partners make the project a “go,” the four-year construction effort will begin in early 2015 and the first of the two planned LNG trains on Lelu Island will start commercial operation in early 2019. Some hurdles remain. The Pacific NorthWest LNG project still needs an Environmental Assessment Certificate (EAC) and two First Nation groups have expressed concerns about the project.

To access the remainder of Slip Sliding Away—Handicapping Western Canada’s LNG Export Projects you must be logged as a RBN Backstage Pass™ subscriber.