The icy “polar vortex” that swept across the US earlier this week brought freezing cold temperatures and a record 134 Bcf/d demand for natural gas on Tuesday (Jan 7, 2014). As a result natural gas prices on that day spiked over $70/MMBtu at the TRANSCO non-New York hub. New England buyers fared better - paying “only” around $35/MMBtu for their gas - largely because of a timely supply boost from a rare import cargo of LNG at the Canaport New Brunswick terminal. But these price spikes and severe stresses on the Northeast system demonstrate one more time how the pipeline network that delivers natural gas to New England remains inadequate. Today we conclude our analysis of the region’s gas pipeline situation by examining projects in the wings that together could provide the robust, reliable gas supply New England longs for.

Previously in this series we described how the hopes of Marcellus gas suppliers to move more of their product east are playing out in very different ways in metropolitan New York City and in New England (see Another Gassy Day in New York City). New pipeline capacity to deliver more gas from Pennsylvania, West Virginia and Ohio to the Big Apple and its environs already is installed and operating, easing the metro area’s supply crunch and (except for polar vortex market conditions) shrinking regional price “basis”. In the second episode (see Please Come to Boston—New England Needs More Pipelines – Part I)” we showed how, in contrast, New England’s gas supply remains constrained by insufficient pipeline capacity. We also explained how the regional electricity market’s failure to provide incentives to owners of gas-fired power plants to lock in long-term gas-pipeline capacity is hampering efforts to build needed gas-delivery infrastructure.

One thing is certain: Demand for natural gas in New England will continue rising, with the power generation sector leading the way. According to analysis prepared by ICF for the New England Independent System Operator (ISO) annual power sector gas consumption is expected to exceed 650 Bcf (up from 400 Bcf in 2012) to accommodate additional gas fired generation capacity (see Figure 1). Additional demand will also come from increased residential and domestic natural gas use. 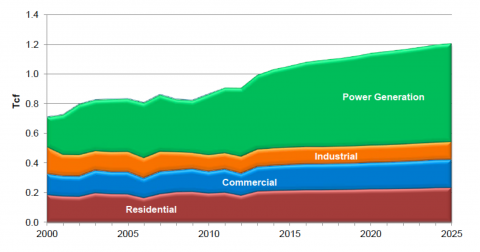 Despite the hurdles to building new pipeline capacity in New England that we discussed last time (see also Fuel for the City), two pipeline projects are well underway in the region, and are scheduled for completion by late 2016. One is Spectra Energy’s Algonquin Incremental Market (AIM) project, which will add up to 342 Mdth/d of capacity to the existing Algonquin Gas Transmission (AGT) pipeline through New York, Connecticut, Rhode Island and Massachusetts. The project will involve 21.4 miles of new pipeline, six new compressor units and other upgrades. The second project is the Connecticut Expansion on Kinder Morgan’s Tennessee Gas Pipeline (TGP). It will provide 72 Mdth/d of additional capacity into southwestern Massachusetts and northern Connecticut, and will involve 13 miles of new pipeline loops in the TGP 200 Line system in New York, Massachusetts and Connecticut, and the acquisition of an existing lateral pipeline.

However, while the AIM and Connecticut Expansion projects will certainly help meet New England’s rising demand for gas, they will not be enough, not by a long shot. So, what else is being planned to help bring the region’s gas-delivery infrastructure up to snuff, and what are the prospects for all—or at least much—of that new pipeline capacity being built? The Northeast Gas Association (NGA) provides a big-picture summary of what is on the drawing boards (see Figure 2).

To access the remainder of Please Come to Boston—New England Needs More Pipelines Part II you must be logged as a RBN Backstage Pass™ subscriber.