Who Stopped the Rain? - Less Hydro Means More Gas Use

Natural gas-fired power generation has always played second fiddle to hydropower in the Pacific Northwest, where dams in the Columbia River Basin typically supply well over half the region’s annual power needs. Gas takes on a more significant role, however, in years like this with lower-than-normal precipitation and hydro generation. And the ongoing phase-out of coal-fired plants in the Pacific Northwest is nudging gas closer to center stage—not just in 2014 but also over the long haul. Today we start a series examining the brightening outlook for gas use in the most hydro-dominant region in the US.

Oregon and Washington State represent the heart of the Pacific Northwest, but it is not uncommon to include northern California, Idaho, and Montana in the region as well, given their location and generally similar terrain. That broader definition also takes in the geographic reach of the 31 federally owned dams in the Columbia River Basin (see Figure 1), which together can generate up to 22 gigawatt (GW)—the equivalent of 20 nuclear reactors. (California also has major hydro assets, and imports a lot of hydropower from the Columbia River Basin dams; we will look into California’s hydro/gas situation—including its historic drought—in a later episode of this series.) The Grand Coulee Dam is by far the largest power generator on the Columbia River, accounting for more than 30% of the region’s hydro capacity. Many of the region’s other large hydro dams are located along the main stem of the Columbia as well; the rest are along the Snake River and its tributaries. 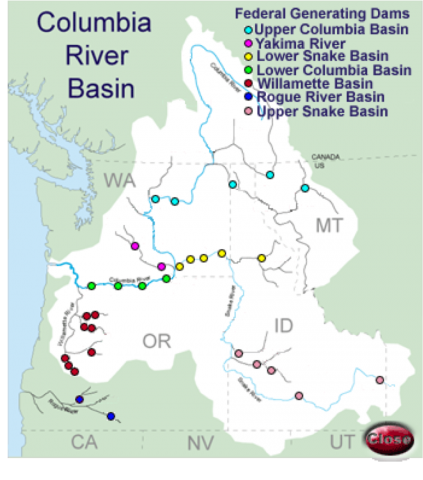 Oregon typically gets about half its electricity from hydro dams and about one-quarter from gas-fired plants, though in a wet year hydro can provide as much as three-quarters of the state’s power. Washington gets three-quarters of its power from hydro in a normal year, and even more in a wet one. The rest of the state’s power comes from a mix of coal-fired plants, gas units and the region’s lone nuclear plant. The degree to which the Pacific Northwest’s hydro facilities can meet the region’s power needs depends, of course, on how much upstream water is available, and that availability is largely dependent on how much snow falls each winter. This year, the news so far has not been good—from hydro’s perspective, that is. Precipitation for the hydrological year that started last October has been running at less than 70% of normal levels throughout most of the Pacific Northwest. The Snake River area in southern Idaho is experiencing what is officially referred to as an “extreme drought” (as is much of California), and almost all the rest of the Pacific Northwest is in a drought classified as either “moderate” or “severe” (see Figure 2). As a result, the National Oceanic & Atmospheric Administration’s (NOAA) Northwest River Forecast Center says the water supply upstream of the Columbia’s Dalles Dam—the benchmark for such measurements--will be at only 94% of its normal level in the April-through-September period this year. It is worth noting that forecasts can change; 2012 seemed like a relatively dry year as of mid-February, but thanks to a few big snowfalls later that winter it ended up being the sixth wettest year since 1960. 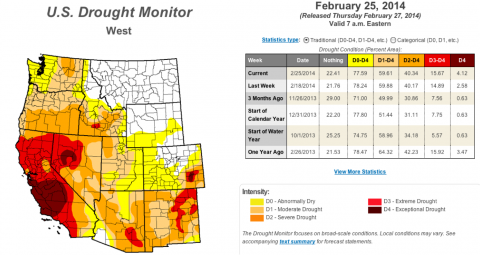 To access the remainder of Who Stopped the Rain? - Less Hydro Means More Gas Use you must be logged as a RBN Backstage Pass™ subscriber.