Despite some recent rain and snow, California continues to experience a historic drought that will further reduce the state’s hydroelectric output and again increase demand for natural gas for power generation. But the drought is only part of the story. California needs to replace the megawatts once provided by the now-shuttered San Onofre nuclear station, and specifically needs flexible gas-fired capacity to back up the intermittent production from the state’s new solar facilities and wind farms. The resulting gas shortages have led to generators being exposed to massive swings in gas prices this winter and facing higher prices this summer. Today we examine the growing connection between gas use and rain, snow, sun and wind in the Golden State.

Hydropower is big on the West Coast. In Part 1 of our series, Who Stopped the Rain?, we saw how natural gas plays second fiddle to hydro in the Pacific Northwest, especially in Oregon and Washington State, where a series of federally owned dams along the Columbia and Snake rivers generate more than half of the states’ annual electricity needs. That episode also discussed how, in relatively dry years the use of gas-fired power plants increases to fill the gap left by water-starved hydro plants.  In Part 2, we looked at other forces driving increased gas use in the Pacific Northwest, including the development of new gas-fired power plants to replace coal units being taken offline and to keep pace with load growth. We also explored the new pipeline infrastructure being developed to move more gas from western Canada and the US Rockies to the increasingly gas-dependent region. Now we take a look at California. 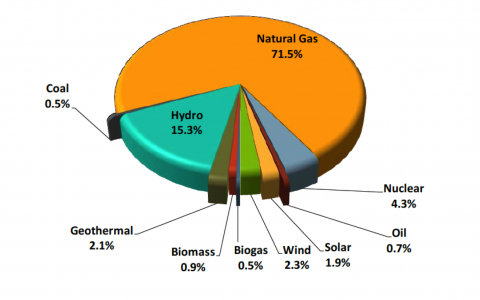 The nation’s most populous state is considerably less dependent on hydro—and more dependent on gas-fired power--than the states to its north. Last year (2013) just over 15% of California’s generating capacity was hydroelectric, while 71.5% was fueled by gas (see Figure 1). But the amount of energy produced by hydro and gas units varies widely year-by-year, depending in large part on how much rain and snow falls upstream of the state’s 100-plus hydro dams. In a very wet year, hydro can contribute 20% or more of the state’s annual electricity needs, but in a dry year it may provide only half that. The yin and yang of hydro and gas output in California is pretty consistent. Figure 2 shows that throughout the 2003-12 period, when water levels and hydro output were up, gas-fired generation was down, and vice versa. In 2008, a particularly dry year, the output of gas-fired units rose to 120 million MWh, more than a third higher than in 2011, the last wet year in the state. It’s been unusually dry ever since 2011, so hydro output has been falling and the output of gas-fired plants has been rising. This  trend seems almost certain to continue in 2014, which despite recent rain and snow may turn out to be the driest in state history.

To access the remainder of Who Stopped the Rain?— Drought Boosting Gas Power Burn Demand in California you must be logged as a RBN Backstage Pass™ subscriber.