Blessed with vast amounts of hydroelectric capacity, the Pacific Northwest has traditionally only turned to natural gas as a supplemental source of power. Sure, gas use for power generation ramps up during drier months of the year, and rises significantly in “dry” years like 2010 when lower-than-normal wintertime precipitation reduced river flows and hydro plant output in late spring and early summer. This year is shaping up as another dry one, but other factors are boosting gas demand in the region. New gas-fired plants are being built to replace retiring coal units and to keep pace with load growth and the prospect of relatively low-cost gas for the foreseeable future is encouraging gas-based industrial growth in the region. Today we look at what’s driving gas demand in the Pacific Northwest and how the region’s pipeline infrastructure is being expanded.

In Part 1 of our series, we provided an overview of the Pacific Northwest’s incredible hydro infrastructure, especially the series of hydro dams along the Columbia and Snake rivers that together can generate as much electricity as 20 nuclear plants. We also talked about how natural gas has always played second fiddle to hydro in the region, but that rising demand for electricity and plans to retire the last remaining coal-fired units is giving gas a higher profile. Depending on how successful the Pacific Northwest is at increasing the energy efficiency of its homes and businesses, several thousand MW of new gas-fired generating capacity may need to be added in the region over the next few years. A need that would only grow if a threat to remove one or more hydro plants for environmental reasons is carried out. 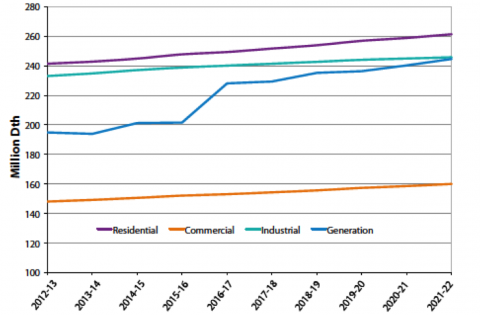 While the power sector is the big driver in rising gas consumption in the region (see the forecast from the Northwest Gas Association in Figure 1) it’s not the only new source of demand. Residential (purple line) and commercial (yellow line) demand for gas is also forecast to increase, thanks to population growth and the expectation that gas prices will stay low. Industrial demand (aqua line) for gas is forecast to increase too—again because of low gas prices. And these increases do not even include at least two LNG export facilities being considered along the Oregon coast (by Oregon LNG at Warrenton and Jordan Cove at Coos Bay) which would require up to 2.1 Bcf/d between them. Meeting all of these new demands will likely require new pipeline capacity into the Pacific Northwest from western Canada, and within the region itself, and several major pipeline projects are under development.

To access the remainder of Who Stopped the Rain—Natural Gas Gaining Market Share in Hydro-rich Northwest you must be logged as a RBN Backstage Pass™ subscriber.