And So it Goes - ERCOT, Texas Regulators, Permian Gas Supply, LNG and the Energy Transition
Get our Daily Blog Email

Cushing crude oil inventories have fallen by 28 percent from 42 MMBbl on January 24 to less than 30 MMBbl on March 14, 2014 according to Energy Information Administration (EIA) data. Since the startup of TransCanada’s Cushing Marketlink pipeline at the end of January, outgoing crude pipeline capacity has exceeded inbound supplies at Cushing and the surplus has been headed to the Gulf Coast. Backwardation in the futures market has also encouraged shippers to move supplies out of storage. Today we begin a new series looking at the Cushing exodus and the resultant growing Gulf Coast stockpile.

We have previously blogged about Cushing crude inventory levels – most recently in August of 2013 (see “The Cushing Floodgates Open”). Cushing is the largest crude storage hub in the US (excluding the strategic petroleum reserve) with a nameplate capacity of about 76 MMBbl (source: Genscape) owned by 14 different private companies. Cushing is also the most active oil trading hub and the delivery point for the CME NYMEX West Texas Intermediate (WTI) Futures contract. WTI also acts as a benchmark for US domestic crude pricing (see The Cost of Crude at Cushing Part 1 and Part 2). There are significant flows of crude into Cushing along pipeline routes from Canada, Chicago, the Rockies, the Anadarko basin and the Permian Basin and significant outbound flows on pipelines to refineries in Ohio, Oklahoma, Kansas and Texas as well as major trunk lines to the Gulf Coast.

The dramatic increase in US domestic crude oil production in the past 3 years meant the Cushing hub became the center of an inventory roller coaster as new supplies searched for routes to market. Figure #1 below shows EIA Cushing crude stocks over the period from the start of 2012 through last week (March 14, 2014). At the start of that period Cushing inventories increased from 28 MMBbl in January 2012 to a record 52 MMBbl a year later (green dotted oval on the chart), largely as a result of an excess of supply over refinery capacity in the Midwest.  Those excess supplies came from new domestic production in North Dakota and the Rockies as well as increased Canadian output. The crude surplus could not find it’s way to Gulf Coast refineries because of a lack of pipeline capacity south from Cushing.

By mid-2013 as new pipeline capacity opened up from Cushing to Houston and direct from the Permian Basin in West Texas to Houston (bypassing Cushing) and as increasing volumes of crude were shipped to Gulf Coast refineries by rail and barge, the Cushing stockpile drained to less than 33 MMBbl between January and September 2013 (orange dashed oval on the chart). Then Cushing inventories increased again by about 10 MMBbl in the final quarter of 2013 and early 2014 as producers increased shipments into Cushing ahead of the opening of the southern leg of the Keystone Cushing Marketlink pipeline (purple dotted oval on the chart). 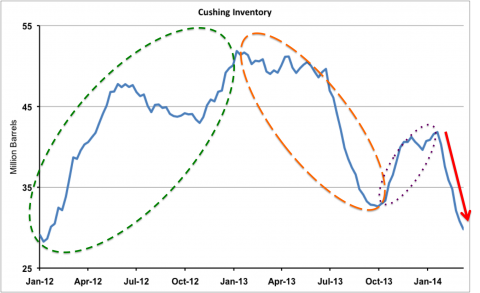 But ever since the Marketlink pipeline came online at the end of January 2014 and began to ship about 300 Mb/d of crude to the Nederland terminal at Port Arthur, TX on the Gulf Coast, stocks at Cushing have fallen again sharply. They fell by 12 MMBbl from 42 MMBbl on January 24, 2014 to less than 30 MMBbl on March 14, 2014 (red arrow in Figure #1). And there is general agreement about the destination of diminishing Cushing supplies – the Gulf Coast. As Cushing inventories have fallen since the start of the year, so Gulf Coast crude stocks have increased - by 33 MMBbl or 20 percent from 161 MMBbl on January 10, 2014 to 194 MMBbl on March 14. We will cover that increase in Gulf Coast crude stocks next time in this series but today we concentrate on why Cushing inventories are draining away.

First of all there has been a price incentive for shippers or owners holding crude at Cushing to bring their crude out of storage. That price incentive is caused by backwardation in the futures market.  We have described backwardation – where prices in the future are lower – and its opposite, contango – where prices in the future are higher than today, previously (see Crude Oil Blues and Record Stocks). At the moment (March 21, 2014) CME NYMEX futures prices for prompt WTI (delivered in May) are $1.71/Bbl higher than they are for delivery two months further out in July. Falling prices in the futures market indicate market sentiment believes physical cash crude prices will be lower in the future. Generally backwardation is a signal to take crude out of storage and sell it today before it loses value. Figure #2 below shows that prompt delivery WTI futures have been in backwardation ever since the middle of January 2014. The blue line represents the discount of WTI prices for delivery three months out compared to prompt delivery.That backwardation has averaged $1.28/Bbl since January 16 – more or less the whole period that Cushing inventories have been falling.