In the first episode in this series (see Texas Bound and Flying) we described the ongoing drain of crude oil inventory from the Cushing, OK Midwest trading and pipeline hub. Stocks at Cushing have fallen by over 13 MMBbl to under 29 MMBbl since the end of January in part because the new TransCanada Cushing Marketlink pipeline came online to Nederland, Port Arthur. The crude exodus has also been encouraged by backwardation in the futures market (declining prices in forward months) as well as a surplus of outbound pipeline capacity at Cushing versus inbound supplies.

And as Cushing inventory has fallen, Gulf Coast stocks have increased. Figure #1 shows Energy Information Administration (EIA) estimates of Cushing stocks against the left axis  (purple line) and stocks in Petroleum Administration Defense District (PADD) III - the Gulf Coast region against the right axis (red line). As Cushing stocks fell by 13 MMBbl between January 24, 2014 and March 21 (green dotted arrow) Gulf Coast stocks increased by 34 MMBbl to 200 MMBbl (orange dotted arrow). That’s a record for crude stocks at the Gulf Coast since EIA started collecting data in 1990. And all the evidence points to further increases in the Gulf Coast crude stockpile in the coming weeks. 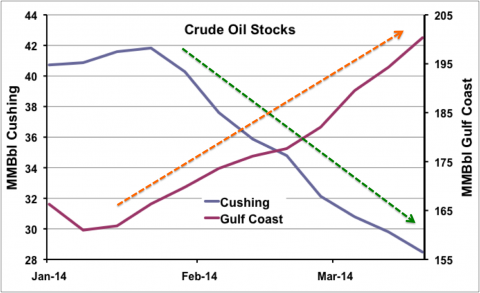 We talked last time about the flow of crude out of Cushing to the Gulf Coast and the chances those flows will increase when the Seaway twin pipeline - adding another 450 Mb/d of capacity out of Cushing into Houston - comes into service (expected June 2014). But there are other flows of crude beside those from Cushing that are adding to the Gulf Coast deluge. These flows are arriving by water, rail and pipeline.

To access the remainder of Texas Bound and Flyin’ – Strained Gulf Coast Crude Infrastructure Under Threat of Disruption you must be logged as a RBN Backstage Pass™ subscriber.