Different Strokes for Different Folks, Part 2 - How the FERC Sets Oil and Gas Pipeline Rates
Get our Daily Blog Email

Expectations for continuing rampant production growth for natural gas, natural gas liquids (NGLs) and crude oil have evaporated in the heat of the price melt-down. Volumes may be holding their own, even with 60% less rigs running, but the days of month-after-month record increases in production are behind us, at least for a while. But what about all that infrastructure that has been and continues to be built? Billions of dollars are going into pipelines, processing plants, petrochemical plants, terminals, storage, etc. based on a much higher production growth scenario than now looks likely. So what happens next? That issue is the theme of a new RBN conference scheduled for July 23rd in New York City called State of the Energy Markets, and is the subject of today’s blog – also an advertorial for the conference.

RBN is tracking 82 natural gas pipeline projects, 18 NGL pipeline projects, 27 crude oil pipeline projects and scores of gas plants, fractionators, export terminals, petrochemical plants, storage facilities – you name it. We are not including every little expenditure that hits the radar screen. These are significant projects that have the potential to impact the market. And these facilities are on top of the billions of dollars that have already been spent on energy infrastructure over the past three years as the industry has geared up to handle the shale revolution. But now, just when much of that infrastructure is coming online, things are slowing. We’ve said frequently that production will be resilient, most recently last week in Houston, We Have a Problem. But on the crude oil side, resilient doesn’t mean a continuation of the 1 MMb/d year growth experienced between 2012 and 2014 shown in the left graph in Figure #1. The last five months have seen production near flat (right graph in Figure #1). Depending on what happens to prices this summer, we could even see declines. Not much, but certainly no 1 MMb/d increase is in the cards for 2015, or any year in the near future for that matter. 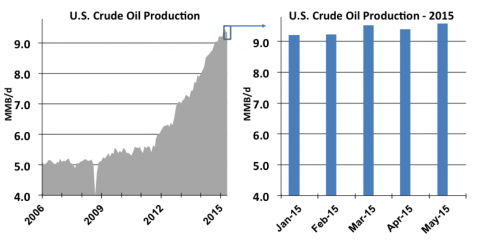 It’s a similar story for natural gas and NGLs. Energy Information Administration (EIA) numbers show lower 48 natural gas production growth has slowed to a crawl over the past six months, and June 2015 pipeline flow data suggests that volumes may be tracking lower in a couple of the previously high growth basins. In other words, production could be falling. NGL production volumes have also been essentially flat over the past six months of EIA data. Propane prices may have collapsed (see Nowhere to Run Nowhere to Hide) but that is more to do with lower exports and the summer demand cycle than it is increasing production volumes.

Little has slowed down in the world of midstream infrastructure development. Only a very few projects have been cancelled, and most projects are proceeding full steam ahead. In a lot of cases the commitments are locked in. Backhoes are turning dirt. What happens to all that infrastructure if the production expectations supporting those investments turn out to be wrong? Of course, who takes the hit all depends on the commercial structure underlying each of those investments.

We talked a bit about the implications when less volume shows up in Back to the Ethane Asylum. In that blog, the question was about ethane rejection, and why ethane prices remain far below the cost of extracting, transporting and fractionating that ethane. We cited several reasons for that apparent pricing aberration, but one of the most important was about contracts – gathering contracts, processing contracts, transportation contracts, fractionation contracts, and more. Or more specifically, the deficiency payments in those contracts, a.k.a., take-or-pay. Most of the new assets built to handle all the new ethane were developed by MLPs (see Masters of the Midstream). And almost all were supported by customer commitments – those take-or-pay deals that require customers to pay for their contracted capacity whether they use it or not. In other words, they are “sunk” costs. It is not just the NGL markets facing this sunk cost issue. The same phenomenon is now headed toward the crude oil and natural gas markets.

Firms that hold the capacity commitments at all of the new projects will by highly motivated to use them, as long as market conditions can cover the small variable cost necessary to operate each asset. In other words, not to cover their full take-or-pay costs, but only to cover the variable portion of their costs. That is because financially they are better off to use the asset than not to, because they have to pay those take-or-pay costs anyway. The implications are profound, in terms of investment returns, cash flows and even (and perhaps most importantly) regional price differentials. These developments have the potential to create multiple instances of the classic “stranded cost” scenario – costs incurred that cannot be recovered in the marketplace.

To address these and other important developments in North America’s markets for natural gas, NGLs and crude oil, RBN is launching a new series of conferences called State of the Energy Markets. These are one-day events, jam packed with every bit of energy fundamentals data that we can cram into eight hours. Plans are to have three or four of these a year in cities where RBN has a large number of members – BUT NOT HOUSTON! We’ve had enough suggestions to hold our conferences in other cities and we have taken those requests to heart. Our State of The Energy Markets conferences are designed to provide (a) an overview of the key issues facing gas, NGL and oil markets, (b) the dynamics of interactions across the three markets, and (c) what the issues mean for production volumes, prices and infrastructure. The conferences start with the big picture but then dig into the details of market behavior, including one or more conference themes.

Our first State of the Energy Markets conference is scheduled for July 23rd in New York City. It is being held at the Sheraton New York Times Square Hotel from 8am to 5pm, and there will be a cocktail reception following the conference. Our unofficial name for this one is ‘Summer in the City’ and the theme is the subject matter for the blog you have just read: Lower Production Growth, Stranded Costs and Market Implications.

Rusty Braziel and other senior members of the RBN team will present most of the content. We may have one guest speaker – that has yet to be finalized. But the point is that this is about RBN fundamentals data and analysis. It is not presentations by multiple energy industry executives.

Format is classroom style, similar to RBN’s School of Energy conferences. You will have WIFI access, a power strip at each seat and downloads of conference slides in real-time. But note, that this is not a mini-School of Energy. There is no fundamentals-of-fundamentals module, no instruction on market idiosyncrasies, no models and no labs. The title of the conference series says it all – State of the Energy Markets. It is what you need to know about what is going on, why it is happening, and what is likely to happen next.

Again, State of the Energy Markets will be held July 23rd from 8am to 5pm at the Sheraton New York Times Square Hotel. Register now and take advantage of the early bird rate. Fees are payable by credit card in US dollars. To register for the conference, go to the Events tab on the RBN website.

If you have any questions or need to use another payment method, please email Brenda via school@rbnenergy.com or call 888-612-9488. We expect this conference to sell out several weeks in advance.Please register early.

To access the remainder of Summer in the City – Lower Production Growth, Stranded Costs and Market Implications you must be logged as a RBN Backstage Pass™ subscriber.