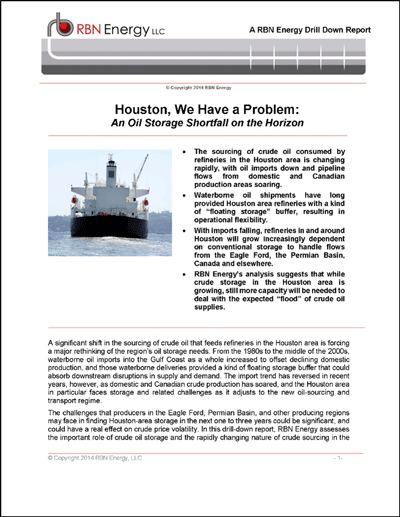 A significant shift in the sourcing of crude oil that feeds refineries in the Houston area is forcing a major rethinking of the region’s oil storage needs. From the 1980s to the middle of the 2000s, waterborne oil imports into the Gulf Coast as a whole increased to offset declining domestic production, and those waterborne deliveries provided a kind of floating storage buffer that could absorb downstream disruptions in supply and demand. The import trend has reversed in recent years, however, as domestic and Canadian crude production has soared, and the Houston area in particular faces storage and related challenges as it adjusts to the new oil-sourcing and transport regime.

The challenges that producers in the Eagle Ford, Permian Basin, and other producing regions may face in finding Houston-area storage in the next one to three years could be significant, and could have a real effect on crude price volatility. In this drill-down report, RBN Energy assesses the important role of crude oil storage and the rapidly changing nature of crude sourcing in the Gulf Coast in general and Houston in particular. The report also examines the current adequacy of crude storage in the Houston area, lists and describes major storage facilities there, and assesses future storage needs.

Houston, We Have a Problem is the tenth in RBN Energy’s Drill Down report series, a suite of twelve reports coming from RBN during 2014 covering many of the key issues expected to impact the markets for crude oil, natural gas and natural gas liquids.

Click to download a preview of Houston, We Have a Problem - An Oil Storage Shortfall on the Horizon.