Part of the Plan, Part 4 - Who'll Be Buying the Heavy Sour Canadian Crude Moving South on Capline?
Get our Daily Blog Email

Japan is the world’s leading importer of liquefied natural gas, and its dependence on LNG has only increased since the March 2011 Fukushima nuclear disaster, which led to the shutdown of Japan’s 48 nuclear units. Some of those nukes are expected to return to service starting in 2015, but it’s possible—some would say likely—that a quarter or maybe even half of Japan’s nuclear fleet will never be restarted. While coal is cheap and oil is cheaper than it was a few months ago, natural gas-fired generation is seen as the best short-, mid- and long-term substitute for nuclear power. As a result, Japan utilities are working to increase and geographically diversify their LNG purchases, and to break what for decades has been a link between the pricing of LNG and oil. Today, we continue our look at how Japan’s response to the Fukushima disaster affects U.S. and Canadian natural gas producers and LNG exporters.

With only minimal domestic natural gas reserves, Japan has long depended on LNG imports from Australia, Qatar, Malaysia and others for virtually all its gas needs. Those needs spiked 20% when all of Japan’s nuclear units were taken offline in the wake of the Fukushima disaster. The nuclear blackout was—and is—a big deal; nuclear units had been providing three-tenths of Japan’s electricity, and there were plans to boost nuclear’s share of power production to 50% by 2030. Post-Fukushima, with most of its 46,000 MW of nuke capacity shut down (the last units were taken offline in September 2013), Japan went into power-emergency mode, ramping up the use of all its fossil-fired units and pleading (successfully, it turned out) for electricity customers to significantly reduce their demand. As we said in Episode 1, Japan was already the world’s leading LNG importer (accounting for about one-third of all LNG imports) pre-Fukushima.  In 2010, Japan imported 71 million metric tons per year (MTPA) of LNG, the equivalent of 9.1 Bcf/d of natural gas, with just over 5 Bcf/d of that used to generate power (see Tokyo Electric Power Co.’s Futtsu LNG terminal/power complex below). Currently Japan imports about 90 MTPA (11.5 Bcf/d), with 7.4 Bcf/d of that for power generation. 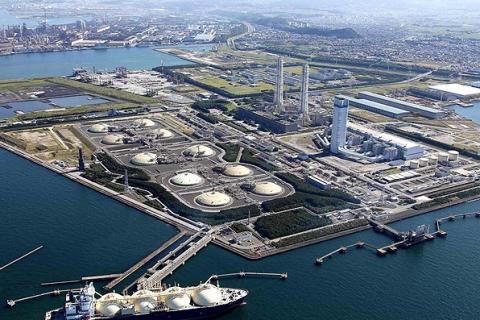 Japan has the LNG import terminals and regasification infrastructure to handle the increase, but with its nukes offline, the nation’s electric grid is maxed out during high demand periods, and all that incremental (and expensive) LNG has pushed Japan from trade surplus to trade deficit. To get its grid (and its overall economy) back on track, Japan needs to start getting some of its nuclear units back in operation. But, with safety a top concern and public support for nuclear power weak, Japan’s nuke reboot will take several years.

To access the remainder of Spouse of the Rising Sun—Japan’s LNG Marriage in a Mid-Life Crisis you must be logged as a RBN Backstage Pass™ subscriber.