Growing Mexican demand for natural gas has been seen as a timely boon to Texas gas producers, which have been losing their Northeast and Midwest markets to the Marcellus and Utica. Gas exports to Mexico still are rising sharply, and several new gas pipelines are planned to move Eagle Ford, Permian and other US gas to Mexico. But the Mexican government is reforming its energy sector, a move that some hope will result in more aggressive development of domestic gas reserves. What does that mean for US gas exports to Mexico? Today we explore the changing lay of the land south of the border.

The last time we examined US gas exports to Mexico (nearly a year ago; see US Gas Heading Way Down South, Way Down to Mexico Way), we discussed how gas producers in Texas have been losing market share in the Northeast and Midwest to the Marcellus, Utica and other, newer US gas-producing areas, and how they have been looking to Mexico as a solid and growing replacement market. In Part 2 of that series, we looked into how the pull of Texas gas into the hungry Mexican market may make it more challenging for the US Southwest to get the increasing amounts of Texas gas it will need, in part because of pipeline constraints. This time, we look at what has changed since last summer, and how those changes are likely to affect things going forward. There are a few things to discuss, including energy sector reforms the Mexican government implemented in December 2013 that may spur more shale gas production in Mexico, as well as plans for more US-to-Mexico gas pipelines and talk of LNG exports (of US-sourced gas) from Mexico’s West Coast.

According to Mexico’s Secretaria de Energia (SENER), higher gas demand from Mexico's electric power and industrial sectors and increased US gas production caused gas exports to Mexico to double from 2009 to 2013 (when they averaged 1.8 Bcf/d), and gas exports are seen doubling again—to 3.8 Bcf/d in 2018. More than 70% of the projected growth in Mexican gas demand will come from the electric power sector; that sector’s gas consumption is seen growing from 2.7 Bcf/d in 2012 to 6.1 Bcf/d in 2027 (see Figure #1), by which time gas-fired units and renewables are expected to dominate Mexican power generation. 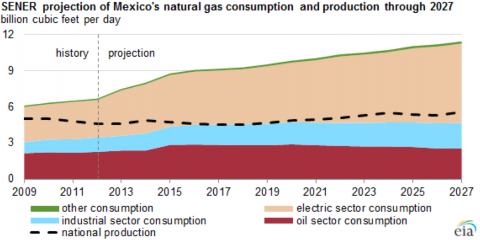 But SENER’s most recent gas market prospectus had Mexico’s domestic production remaining relatively steady for the next 10-plus years at less than 6 Bcf/d (dotted line in Figure #1); it did not factor in the potential effect of the far-reaching energy-sector reforms the Mexican government has been working on and is on the verge of implementing. Those reforms, made possible by amendments to Mexico’s constitution enacted in December 2013, are expected to open up Mexican oil and gas production—and retail distribution of gas—to private investors (foreign and domestic). In making the case for the constitutional changes, Mexican President Enrique Pena Nieto said reforming the country’s energy sector would increase domestic gas production from the current 5.7 Bcf/d to 8 Bcf/d by 2018 and 10.4 Bcf/d in 2025. Another quick look at Figure #1 tells us what that would mean: If President Pena Nieto is correct (and, as we will explain, to us his production estimates seem wildly optimistic), Mexico within four years would be able to meet the vast majority of its gas needs with domestically produced gas, and its need for US and other imported gas would shrink to perhaps 1 Bcf/d. We do not think that will happen. It is true that Mexican gas (and oil) production could benefit substantially as it is opened up to private-sector participation, investment and innovation. According to the US Energy Information Administration (EIA), Mexico has 545 Tcf of technically recoverable shale gas, ranking it sixth in the world (China is first, with 1,115 Tcf, and the US is fourth, with 662 Tcf). Much of Mexico’s shale gas is within the Burgos Basin, a physical extension of the Eagle Ford that runs southeast from Texas’s hottest shale play to the Gulf of Mexico (see Figure #2).

To access the remainder of No Need for Mexicali Blues—Mexico Likely to Remain a Huge Gas Market for US you must be logged as a RBN Backstage Pass™ subscriber.