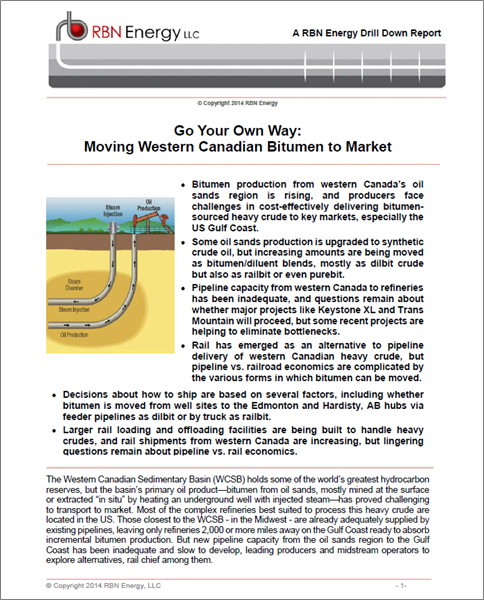 The Western Canadian Sedimentary Basin (WCSB) holds some of the world’s greatest hydrocarbon reserves, but the basin’s primary oil product - bitumen from oil sands, mostly mined at the surface or extracted “in situ” by heating an underground well with injected steam - has proved challenging to transport to market. Most of the complex refineries best suited to process this heavy crude are located in the US. Those closest to the WCSB - in the Midwest - are already adequately supplied by existing pipelines, leaving only refineries 2,000 or more miles away on the Gulf Coast ready to absorb incremental bitumen production. But new pipeline capacity from the oil sands region to the Gulf Coast has been inadequate and slow to develop, leading producers and midstream operators to explore alternatives, rail chief among them. Key takeaways from the report include:

Go Your Own Way is the seventh in RBN Energy’s Drill Down report series, a suite of twelve reports coming from RBN during 2014 covering many of the key issues expected to impact the markets for crude oil, natural gas and natural gas liquids.