A lot of the big run-up in U.S. crude oil production since 2010 is tied to horizontal drilling and hydraulic fracturing in the Eagle Ford, the Bakken and other tight-oil plays. But while oil from shale and other reservoirs with very low permeability has grabbed the headlines, crude production from enhanced oil recovery (EOR) in older conventional oil fields—especially using CO2 flooding techniques--is on the rise. Crude production from CO2-based EOR operations could more than double by 2020 (to 600 Mb/d or higher), providing yet another boost to U.S. energy independence. In today’s blog, we begin a look at enhanced oil recovery, with a focus on techniques that use large volumes of carbon dioxide.

The easy to find conventional oil plays in the U.S. are pretty much tapped out, and while quite a bit continues to flow from old wells, the focus of new drilling is now on crude that plays hard to get. Major advances in horizontal drilling and hydraulic fracturing have resulted in big gains in the output of shale and other tight-oil plays since 2010. According to the U.S. Energy Information Administration (EIA), the Eagle Ford (1.6 MMb/d in September 2014) and the Bakken (1.2 MMb/d)—the two biggest tight-oil plays—now account for nearly one-third (31%) of total U.S. production (8.8 MMb/d, on average from mid-August through mid-September 2014). Tight-oil production will continue to drive growth in total crude output, which (according to the reference case in EIA’s 2014 Annual Energy Outlook) will reach 2019 at 9.6 MMb/d (with tight-oil production, at 4.8 MMb/d, accounting for half of the total; see Figure #1).  (That sounds like a big increase, but RBN’s outlook is about 12 MMb/d in that year, closer to EIA’s high resource case.) 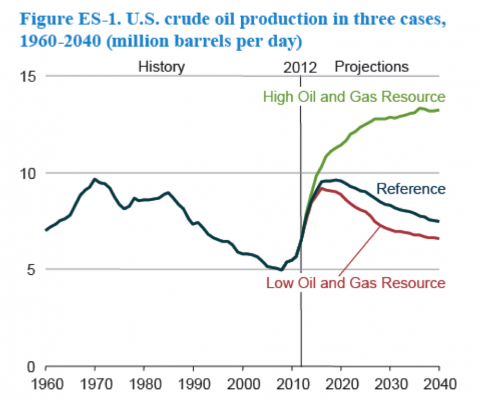 EOR, like fracking, is a way to unlock trapped oil. Primary recovery of oil from a conventional well (through natural pressure and pumps) typically recovers only about 10% of a reservoir’s total oil and secondary recovery (mostly injecting water to displace oil and drive it to a production wellbore) recovers another 20 to 40%, leaving as much as 70% of a reservoir’s oil in place. EOR—or tertiary recovery--can recover a portion of what’s left. There are two main EOR techniques in relatively widespread use--thermal and CO2-EOR. Thermal-EOR involves injecting steam to increase the flow of heavy, viscous oil (see We Are the Champions for a more in depth look at how thermal techniques are used in Western Canada’s Oil Sands). CO2-EOR involves injecting CO2 (or in some cases nitrogen or natural gas) to push additional oil to the wellbore. No definitive number is available on the combined contribution of thermal-EOR and CO2-EOR production to total U.S. crude output, but we can come up with a pretty good estimate. According to the U.S. Department of Energy (DOE) thermal techniques account for 40% of total EOR-based output (most of it in California and almost all of that from Chevron and Occidental Petroleum fields) and CO2 techniques account for the other 60% or so. (There’s also chemical injection EOR, but that accounts for less than 1% of total EOR-based output.) EIA data indicates that production from CO2-EOR wells (there are currently more than 110 of them - most in the Permian Basin) stands at about 280 Mb/d, which suggests total EOR-based production currently tops 400 Mb/d. That’s only about 5% of current U.S. crude production (that’s why EOR has a Rodney Dangerfield complex), but CO2-EOR-based production is expected to continue rising through the 2020s and beyond under just about any scenario (see Figure #2).

To access the remainder of EOR Don’t Get No Respect—The Rodney Dangerfield of Crude Production you must be logged as a RBN Backstage Pass™ subscriber.