The much-discussed shortfall in natural gas pipeline capacity into New England has been largely mitigated this winter because generators—encouraged by low oil prices and incentives to lock in backup supplies of oil and LNG—are ready, willing and able to switch their dual-fuel power plants away from pipeline natural gas and onto oil and LNG-sourced gas if market conditions warrant. But now that prices for those fuels are more attractive, could switching to oil and imported LNG during winter’s coldest days and nights actually be a longer term solution to New England’s pipeline capacity problem instead of just a stopgap until new pipelines are built? Today, we begin a look at the changing economics of burning oil and LNG-sourced gas to help power New England when the region turns arctic, and what they may mean for proposed pipeline expansion projects.

This winter has provided some déjà vu to the power generation and fuel supply sectors in New England. As the season approached, oil (which was once, with coal, a fuel of choice for generators in the region) was being delivered to and stockpiled at the significant number of power plants in the region that can run on either natural gas or oil. More recently, imports of liquefied natural gas into the region’s LNG-receiving terminals spiked, with the expectation that LNG—like oil—will supplement and even displace gas piped into New England from the south and west when doing so makes economic sense. New England’s electricity market is highly competitive, and up-to-the-moment information about the degree to which oil (and LNG-sourced gas) is displacing piped-in gas for power generation is scarce. But, as we’ll get to in a moment, there are signs that this winter oil and imported LNG are playing out-sized roles.

As readers of RBN Energy’s blogs know, New England’s increasingly gas-dependent power grid has been challenged the past few winters (typically during stretches of unusually cold weather) when the vast majority of the inbound gas pipeline capacity (which totals about 3.6 Bcf/d) is being used by the region’s local distribution companies (LDCs) to provide space heating (see our Please Come to Boston series). During cold snaps like the one that gripped much of the East in mid-February, there’s precious little gas for the growing number of gas-fired power plants in New England that (thanks to the retirement of older coal units and, in December 2014, the Vermont Yankee nuclear plant) now account for nearly half of the region’s total generating capacity (up from 15% in 2000). Concerned that the reliability of New England’s power grid was being undermined by pipeline capacity shortfalls, ISO New England (the regional grid operator) in the winter of 2013-14 implemented a Winter Reliability Program (WRP) that incented dual-fuel power plants (ones that can burn either gas or oil) to stockpile oil that could be used to run their plants if piped-in gas was not available. That initial WRP helped avert power-supply shortfalls by ensuring that several dual-fuel units could switch to oil when needed, and this winter the program was expanded to incent gas-fired plants both to lock in backup supplies of LNG as well as to make their units dual-fuel capable if they were not already. 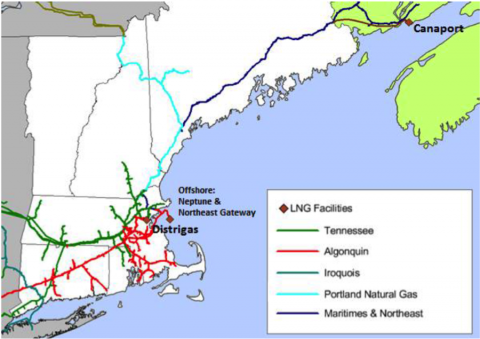 The final WRP numbers show that by the December 1, 2014, deadline, 80 generation units participating in the program had procured about 4.5 MMBbl of oil that they can use this winter to run dual-fuel units in the event of gas-supply problems, very high power demand or a combination of the two. Also, six units notified ISO New England that they have purchased LNG supplies totaling about 500 MMcf that they could turn to if gas pipeline capacity into the region from outside dries up. Further, six generators committed to making their gas-only plants dual-fuel by next winter; 1,000 MW of that capacity was expected to be available for the winter of 2014-15.

To access the remainder of Don’t Give Up On Us—Can Oil and Imported LNG Save New England? you must be logged as a RBN Backstage Pass™ subscriber.