Western Canadian heavy crude production is set to increase by more than 1 MMb/d over the next 5 years. Pipelines out of the region are full and new capacity is not expected online until 2014. Just like the Bakken in 2012, producers are looking more seriously at rail. The economics of getting crudes like Western Canadian Select (WCS) to market by rail instead of pipeline are favorable because of heavy discounts versus Gulf Coast equivalent crudes like Mexican Maya. Today we look at the rail options for Canadian producers.

The first episode in this series provided an introduction and overview of the “Year of the Tank Car” (see Crude Loves Rocking Rail). We described the rapid growth in US crude oil production that pressured pipeline logistics and made rail a viable alternative for moving crude to market. The second installment (see Crude Loves Rocking Rail – The Bakken Terminals) began our survey of rail loading terminals with a map and a complete list of facilities in North Dakota.  The follow up episodes covered EOG, Hess and Inergy, Plains, Enbridge and Global, Bakken Oil Express, Dakota Plains, BakkenLink and Savage and Bakken terminals north of the Canadian border in A Plethora of Terminals in the Williston Basin.

All of the episodes in this series can be found at the www.rbnenergy.com website under the Daily Energy Post tab. This episode and the next in the series cover rail-loading terminals in the heavy oil sands region of Western Canada. We will publish these two on successive days (one today and one tomorrow).

Before we get into the rail terminals being built or contemplated to transport heavy crude to market lets briefly recap the challenge producers in Western Canada face in getting their crude to market.  Western Canadian heavy crude production from oil sands (bitumen) is expected to increase from about 1.7 MMbd/ in 2011 to 2.9 MMbd/d in 2017. Oil sands crude is heavy like treacle and difficult to move by pipeline because it doesn’t flow well. Yet the largest market for heavy crude is several thousand miles away from the production areas at US Gulf Coast refineries configured to process similar grades from Mexico and Venezuela (see Production Stampede – Where Will Canadian Oil Production Go?). Travelling that kind of distance is most efficiently accomplished by pipeline. To get heavy crude moving in a pipeline it has to be diluted with natural gasoline or condensate to make “dilbit” crude - an example is Western Canadian Select crude (WCS). We recently covered the resulting demand for diluent (see Fifty Shades of Eh? Part 1 and Part 2). 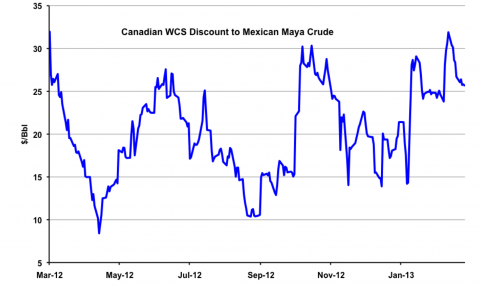 Check out the huge spread between WCS and Maya in the above graph.  This differential  is a topic for another blog in its own right but it is important to reference it here  because it represents a significant opportunity for Canadian producers who can get their crude oil to the Gulf Coast. In other words the $20/Bbl average WCS to Maya discount is the additional revenue Canadian producers would realize (less transportation cost) by delivering their crude to the Gulf Coast where heavy crude prices are generally set against Maya. The estimated cost of pipeline transportation between Western Canada and the Gulf Coast is currently between $7 - $11/Bbl (source: Gibson Energy Investor Presentation). As we shall see in part 2 of this blog the cost of rail transport from Western Canada to the US Gulf varies between $14 and $21/Bbl (source: Gibson Energy).

The situation for Canadian producers in 2013 therefore resembles that of US producers in the North Dakota Bakken region at the start of 2012. Pipeline capacity is full. New pipelines are coming but not for a couple of years. Crude prices are discounted because of the lack of transportation and price differentials at the destination markets make alternatives to pipelines worthy of closer investigation. The principal difference between the Bakken situation last year and Western Canadian producers this year is the limited number of destinations for heavy crude versus lighter Bakken crude. As we have seen in this series, Bakken producers can ship by rail to plenty of refineries configured to process their crudes on the East and West Coast as well as the US Gulf. For Canadian heavy crude the options are more limited.

The rail options for Canadian heavy crude producers are limited by available heavy crude refinery capacity destinations and rail offloading facilities. The number of refineries configured to process heavy crude outside the US Gulf Coast is limited. Midwest heavy crude refineries are already oversupplied via existing pipeline routes from Canada. There is just one East Coast refinery (PBF Delaware City, DE) that can process heavy crude and that is already receiving western Canadian supplies by rail (40 Mb/d today, 80 Mb/d by the end of 2013). There is more heavy crude capacity at West Coast refineries but so far only limited crude by rail destination offloading facilities have been developed outside the Northwest.

The offloading facilities required to handle Canadian heavy crude can be pretty straight forward if you are dealing with dilbit crude. That crude has been blended with about 30 percent diluent to make it flow to pipeline specification and can be unloaded from a rail tank car in the same way as any “regular” crude like Bakken light sweet. Where things get complicated with heavy crudes is that rail transportation offers the opportunity and the option for producers and shippers to reduce the amount of diluent included with the crude. Using specially adapted railcars with steam heated coils, it is possible to transport heavy crude bitumen with little or no diluent blended in.

There are advantages and disadvantages to transporting bitumen this way. We will delve into those pro’s and con’s in the next episode of this series (to be posted tomorrow) in addition to detailing the current and planned rail loading terminal facilities in the heavy oil sands region of Western Canada.