In the space of just over one year North Dakota crude rail takeaway capacity has reached close to 1 MMBb/d.  According to the North Dakota Pipeline Authority 58 percent of October 2012 Williston Basin production of over 800 Mb/d was transported out of North Dakota by rail. There are now 18 crude loading terminals operating in North Dakota on the BNSF and Canadian Pacific (CP) railroads. Today we continue our series on crude by rail with a North Dakota terminal inventory.

The first episode in this series provided an introduction and overview of the “Year of the Tank Car” (see Crude Loves Rocking Rail). We described the rapid growth in US crude oil production that pressured pipeline logistics and made rail a viable alternative for taking crude to market. We also described the growth of crude by rail traffic in 2012 and the impact on railroads and tank car manufacturers. This second installment in our series begins a detailed survey of rail loading terminals with a look at North Dakota.

Crude oil production from the prolific Bakken formation in North Dakota rose by 200 Mb/d in 2012 from 500 Mb/d to over 700 Mb/d. In the Williston basin as a whole that includes South Dakota and Montana production was over 800 Mb/d in October 2012.  If the current rates of growth continue then crude production in the Bakken will reach 1 MMb/d by the end of 2013.  The biggest challenge for land locked North Dakota producers is getting all that crude to market. Limited pipeline takeaway capacity in the region is full and Bakken producers compete for space on those pipelines with barrels coming into the Midwest from Western Canada. Rising volumes of production crude making their way into the Midwest quickly exceeded refinery demand towards the end of 2011 and into 2012 leading to record inventory builds at the Cushing, OK hub. Pipeline projects to transport crude from the Midwest to the larger refining centers on the Gulf Coast were on the drawing board but not being built fast enough. As a result Bakken producers faced heavy discounts for their crude versus the benchmark West Texas Intermediate (WTI) at Cushing. WTI prices in turn were discounted against crude prices set by the international market at coastal locations.

To meet this challenge producers turned to rail transport. Last November (see From a Famine of Pipeline to a Feast of Rail we noted that back in January 2012 constrained pipeline capacity had producers wringing their hands at discounted crude prices (see Bakken Buck Starts Here Part III) and wondering how their crude would even get to market. Just nine months later in September after a significant build out of rail loading facilities the market began to realize that crude by rail could successfully plug the gap left by lengthy pipeline project lead times. As a result $20/Bbl plus  Bakken crude price discounts to WTI narrowed (see Railing Against the Pipelines) and have remained in the low single digits since. The triumph of rail over pipelines was perhaps best signified by the cancellation of Oneok’s proposed 200 Mb/d Bakken Oil Express pipeline from North Dakota to Cushing in November 2012. The company said there was insufficient shipper interest in moving crude to Cushing by pipeline. The chart below from the North Dakota Pipeline Authority (NDPA) shows the latest estimates of crude transportation away from the Williston Basin (that includes North Dakota, Montana and South Dakota). Rail accounted for 58 percent of takeaway transportation as of November 2012 – which adds up to 475 Mb/d out of the total Williston Basin crude production of 825 Mb/d in October 2012. 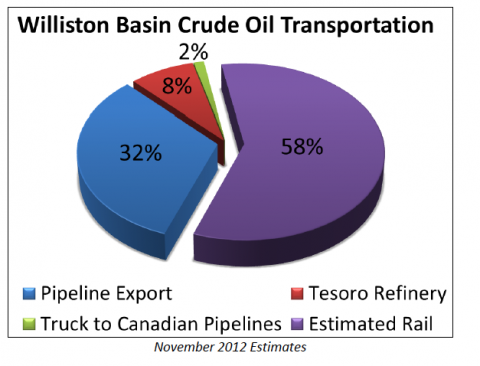 With 18 crude rail loading terminals of various sizes and capacities now operating in the North Dakota Bakken production area, the logistics challenge to find routes to market have come full circle from a famine of pipelines to a feast of rail. Looking ahead to the end of 2013 when production is expected to hit the 1 MMb/d mark, takeaway capacity by pipeline will be over 600 Mb/d and rail capacity will exceed 900 Mb/d – a total of 1.5 MMb/d – enough to handle surging production at least until 2014.

The rest of this blog provides a complete terminal guide to rail loading in North Dakota. The guide consists of a map and table listing each terminal by name with its current rail loading capacity. You can cross reference the terminals on the map to the table using the names indicated in column 1 of the table. The map shows the terminal locations as well as the main drilling activity (red dots). A larger version of the map is also attached at the bottom of the blog so that you can download a copy in PDF form (as usual – please email info@rbnenergy.com if you have trouble downloading the map and we will send you a copy). Here is a smaller version of the map. 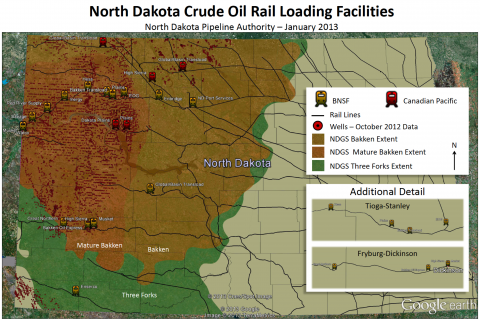 And here is the table: 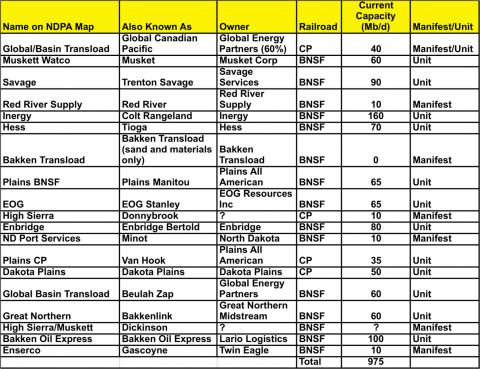 There are three Global/Basin Transload facilities marked on the map but only two of these – the Basin Transload Canadian Pacific (CP) terminal at Stampede (close to the border with Canada) and the Basin Transload BNSF terminal at Beulah (center of the map) actually load crude. The third Basin Transload facility only delivers fracking sand. Global Energy Partners acquired a 60 percent interest in these terminals in October 2012. The Bakken Transload terminal is also only a delivery terminal for fracking sand and other materials that does not currently handle crude oil. The only terminal we do not have any estimate of rail loading capacity for is the High Sierra/Musket Dickinson terminal that we believe is quite small and does not handle unit trains.

The huge expansion in crude rail loading terminals in the Bakken has successfully overcome the pipeline capacity constraints for this land locked basin. In the next episode in this series we will provide more insight into the ownership of these Bakken terminals, the destinations that they can reach and the costs associated with loading and shipping crude out of North Dakota. Although rail capacity has been built that can handle surging production the economics of rail by crude could be reversed by changes in crude pricing differentials.