Say “LNG” and the first thing that comes to mind for most of us is the potential for liquefied natural gas exports to Asia and other overseas markets. One of the hottest LNG markets right now, though, is domestic, and involves super-cooling natural gas into LNG and using it to power drilling rigs and hydraulic fracturing pumps, as well as ships, locomotives, and long-haul trucks. A number of small liquefaction plants have been operating for years in the US – most connected to peak shaving generation facilities but projects with capacity totaling more than 2 million gallons/day are under construction or being planned.  Today we begin a new series examining the increasing use of LNG as a cheaper, cleaner alternative to diesel and shipping fuel, and the LNG production capacity being developed to keep pace with rising demand.

The fuel costs associated with oil and gas drilling and fracking operations are a big deal. On average, a drilling rig uses about 1,750 gallons/day (g/d) of diesel that costs as much as $3/gallon (off-road diesel does not incur the same federal and state taxes as on-road). The pump-related fuel costs for a typical fracking job, meanwhile, can average $125,000 or more. As we will get to, running the engines that power drilling rigs and fracking pumps on a 30/70 blend of diesel and gas from LNG can reduce fuel costs by 30% or more, and running the engines on 100% gas from LNG can save even more. The cost of fuel also is paramount in the transportation sector. A Great Lakes bulk carrier can burn 2 million gallons of marine distillate or marine residual oil (also known as bunker fuel) per year, while a diesel locomotive hauling 3,000 tons of freight 500 miles might burn 3,200 gallons of diesel. (CSX’s locomotives alone used 482 million gallons of diesel in 2013.) A long-haul 18-wheeler, meanwhile, might consume 12,000 gallons of diesel annually (and there are three million 18-wheelers in the US). All could realize substantial fuel-cost savings by switching to all gas or a blend of gas and oil-based liquid fuel.

There are many reasons to believe that LNG’s day in the sun as a replacement for conventional, crude oil-based liquids like diesel and bunker fuel has finally arrived. After all, natural gas is plentiful, the per-BTU cost spread between oil and gas remains high, exploration and production companies want to minimize their energy costs (so do shipping, railroad and trucking companies), and the energy and transportation sectors are under increasing pressure to reduce emissions. For some time, however, talk of shifting to LNG was just that—talk—largely because the infrastructure to support the shift was not in place, and questions remained about whether reworking engines to allow them to burn either a diesel/natural gas blend or only natural gas could be justified. The question now is, have we reached the turning point? Is the economic rationale for switching strong and certain? And is the LNG production and delivery infrastructure up to the task? 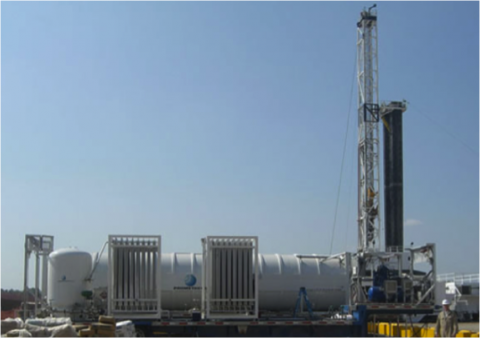 Diesel, which is produced through the distillation of crude oil, for decades has been the go-to fuel for a range of heavy-duty uses, including locomotive and truck engines, and “off-road” engines that power drilling rigs and fracking pumps. Not only is diesel widely available, it packs a higher BTU/gallon content than gasoline, and its engines are simpler (no spark plugs!) and more durable than their gasoline counterparts (partly because gasoline units burn hotter than diesel). But diesel prices, like those for gasoline, are largely set by international crude prices that are far higher than US natural gas prices. The current crude to gas ratio (West Texas intermediate (WTI) crude priced at Cushing, OK divided by natural gas priced at Henry Hub, LA) is about 24 – not as high as it was in 2012, but still four times the approximate six-to-one BTU energy ratio of crude to gas (see the RBN Spotcheck Charts on our website for a daily chart of the crude to gas ratio). Not only is natural gas far cheaper on a BTUs/dollar basis than crude, LNG and compressed natural gas (CNG – see Fuel For the City)—another gas-based diesel alternative—are cheaper on a BTUs/dollar basis than diesel, even with the added costs of liquefying or compressing gas and of “re-gasifying” right before the gas is combusted. There is also an important environmental angle to this. Drillers are facing ever-tightening emissions rules, and shifting from diesel to either natural gas or a diesel/natural gas (DNG) blend is a silver bullet for compliance. That has gotten everyone from oil and gas drillers to railroads to trucking companies asking, “Why not at least look into making a switch from diesel?” The same is true for shipping companies, whose vessels’ engines typically run on either marine distillate or bunker fuel. They too are facing much tougher emission standards (see Yo-Ho-Ho and a Cargo of Bunkers).