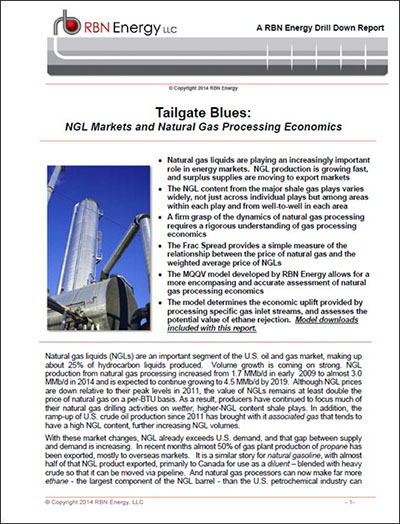 NGL production from natural gas processing increased from 1.7 MMb/d in early 2009 to almost 3.0 MMb/d in 2014 and is expected to continue growing to 4.5 MMb/d by 2019. Although NGL prices are down relative to their peak levels in 2011, the value of NGLs remains at least double the price of natural gas on a per-BTU basis. As a result, producers have continued to focus much of their natural gas drilling activities on wetter, higher-NGL content shale plays.

With these market changes, NGL production already exceeds U.S. demand, and that gap between supply and demand is increasing. Surpluses of propane are being exported to overseas markets. Natural gasoline is moving to Canada for diluent. And about 20% of the ethane that could be produced is being rejected – sold into the natural gas market.

Despite the important role of NGLs, these markets are not well understood, both due to their complexity and the unique aspects of their production, transportation, storage and use. This RBN Energy Drill-down Report illuminates one of the most misunderstood aspects of NGL markets – the extraction of NGLs from natural gas.

Tailgate Blues is the eighth in RBN Energy’s Drill Down report series, a suite of twelve reports coming from RBN during 2014 covering many of the key issues expected to impact the markets for crude oil, natural gas and natural gas liquids.