Calling the Shots - Exports Are Now the Driving Force in U.S. Crude, Gasoline and Distillate Markets
Get our Daily Blog Email

Things are not looking so good in the liquefied natural gas sector. LNG prices--both in the spot market and in contracts linked to oil prices—are very low, LNG demand growth is weak or non-existent, and a flood of new liquefaction capacity is coming online. But as we’re starting to see with crude oil, markets thrown out of whack respond; they try to self-heal. Low LNG prices are spurring demand growth in Europe and attracting some new buyers—Egypt, Jordan and Pakistan among them. The pace of liquefaction-capacity expansions is slowing. And Asia may finally get an LNG hub, which would only improve LNG’s long-term prospects there. Today, we continue our look at the fast-changing international market for LNG with an assessment of demand and destinations.

As we said in Episode 1 of our series, the decisions to convert four U.S. LNG import terminals to liquefaction/LNG export terminals (and to build a greenfield liquefaction/export terminal in Corpus Christi, TX) were spurred by the expectations that natural gas from the Marcellus, the Eagle Ford and other prolific shale plays would be so plentiful (and so inexpensive) that the U.S. could garner a significant share of global LNG trade--and that international LNG demand would be soaring (see our A Whole New World blog series and our LNG Is a Battlefield Drill Down report). The biggest leg-up for prospective U.S. LNG exporters appeared to be the yawning gap between the combined cost of securing gas, liquefying it, and shipping the resulting LNG to Japan, South Korea or China and the (mostly crude oil-indexed) prices that those countries were paying Indonesia, Qatar and other major LNG exporters for their product. The series-opening blog also laid out several factors that will help determine how U.S. players—gas producers, midstream companies and LNG exporters—will fare in the very different market (low oil and LNG prices, slowing LNG demand, too much liquefaction capacity) that emerged instead. 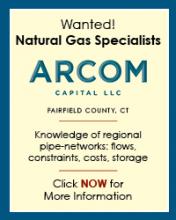 Our friends at Arcom Capital are looking for natural gas specialists with knowledge of regional pipe networks, flows, constraints, costs and storage.

By almost any measure, 2015 was an annus horribilis (Latin for “horrible year”) for LNG. LNG spot prices fell to less than $7/MMBtu (oil-linked contract prices are only marginally higher); worldwide demand inched up only 2% (one-third the pace once expected), to about 250 million metric tons per annum (MTPA), the equivalent of 32 Bcf/d of natural gas; the supply/demand gap continued to grow, with more than 160 MTPA of new liquefaction capacity coming online by 2020 (including 62 MTPA in the US); short-term LNG vessel charter rates plummeted (to less than $30,000/day), and new-vessel orders fell below 20 (more than 60 were ordered in 2014). The numbers don’t get much better when you start to unpack them. Shipments to the world’s three largest LNG importers (which account for well over half of all LNG consumption) fell year-over-year: down 4% in Japan (dark blue segments in Figure 1), 11% in South Korea (light blue), and 1% in China (gray). And while 2015 imports to Taiwan, India and the UK (three distinctly smaller buyers) were up 7%, 2% and 28%, respectively, the truth is that total LNG imports would have actually declined last year (and not risen by 4 MTPA) were it not for four countries that started importing LNG in 2015; taken together, Egypt, Jordan, Pakistan and Poland imported a total of about 6 MTPA (the equivalent of about 120 MMcf/d) last year.