U.S. crude oil production is finally falling in response to the collapse in oil prices that started in mid-2014. Output is now poised to drop below 9 MMb/d--700 Mb/d off its April 2015 peak—and the rate of decline is accelerating. That raises all-important questions of how low will production go, which shale basins will be hit the hardest, and the most important question of all - how much will oil prices need to rise to reverse those declines?  Understanding the factors necessary to answer these questions is the focus of RBN’s latest Drill Down report that we highlight in today’s blog. The bottom line?  All production economics is local.

In June 2014, just as oil prices were about to fall off a cliff, the U.S. was producing 8.7 MMb/d of oil and the Cushing, OK spot price for West Texas Intermediate (WTI) was $106/Bbl. Do the math; about $900 million/day of oil was being produced every 24 hours. Even as oil prices plummeted over the next few months (to less than $50/Bbl by January 2015), production kept rising, propelled in large part by the momentum of ever-growing drilling and completion that marked the previous few years. In fact, U.S. production didn’t peak until April 2015, at 9.7 MMb/d. Fast forward almost another year to now. As we said, production is down to about 9.0 MMb/d (but still 300 Mb/d higher than when prices started free-falling), and oil prices, while up from their recent lows in the mid-$20s, are hovering around $40/Bbl--$60-plus dollars lower than they were 21 months ago. The daily value of production is well under $400 million, and most industry participants are hurting, some of them badly. 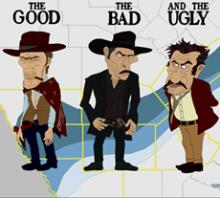 The GOOD, the BAD and the UGLY

We have released our third 2016 Drill-Down report for Backstage Pass subscribers which addresses what the fragmentation of U.S. shale economics means for today’s crude oil output declines and what it implies for an eventual resumption of production growth.

More information about The Good, The Bad and The Ugly here.

In this environment, it’s hard to imagine a more timely and significant question than this two-worder: Now what? As we describe in our new Drill Down report (available to RBN Backstage Pass holders and for individual purchase), answering that question requires an investigation into not only the basin-by-basin economics of producing oil, but into production economics at a much more local level. For it is only when we understand the rate of return (or profitability) of wells at a more granular level then we can begin to figure out when it makes sense to drill and complete wells (or not) in each of the scores of counties within the Permian, the Eagle Ford, the Williston and other major U.S. basins. And that county-by-county information helps us develop production expectations for each basin and, from there, for the U.S. as a whole under various oil-price scenarios.

To access the remainder of The Good, the Bad and the Ugly: U.S. Crude Oil Production Declines and Eventual Rebound you must be logged as a RBN Backstage Pass™ subscriber.