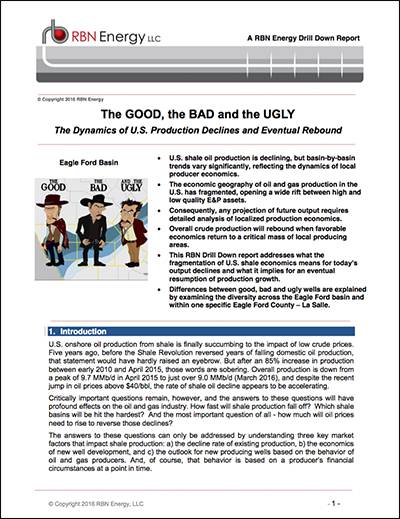 U.S. oil production is finally succumbing to low crude oil prices.   Producers have cut their capital expenditures, reduced drilling and completion activities and focused on their best sweet spots with higher IP rates that give them the extra shot of revenue they need to survive in tough times.

But the impact has been anything but evenly distributed. Basin-by-basin and county-by-county trends vary significantly, reflecting the dynamics of local producer economics.  Areas where initial production rates (IPs) are attractive enjoy better producer economic returns, consequently drilling continues in those areas.  In other areas with lower IPs, drilling has ground to a halt.

This RBN Drill Down report was referenced in the March 28th edition of the Wall Street Journal.  Check it out: Want to Bet on Oil Companies? It’s All About the ZIP Code – by  Ryan Dezember

This is quite different from the days of $100/Bbl oil. Although there were significant differences in producer economics across the major shale producing basins (some areas much better than others), most of the areas being drilled at the time enjoyed positive returns. But with much lower prices, the economics in some areas have now dropped to the marginal range, while other areas have dropped well below zero.

The result has been a fragmentation of the economic geography of oil and gas production in the U.S., opening a wide rift between high and low quality E&P assets.  Our new Drill Down report suggests that these assets can be segmented into three groups – the Good – where IPs are high, producer rates of return remain attractive and where drilling continues, the Bad – where more modest IPs and producer returns have resulted in minimal drilling activity, and the Ugly – where production rates and returns are unattractive and wells are no longer being drilled. We use the Eagle Ford as our representative basin to describe this segmentation and its implications.

Understanding the factors necessary to assess at the local level which wells make sense to drill (and which don’t), and what that means for future production growth (or lack thereof) is the focus of RBN’s latest Drill Down report.

The GOOD, the BAD and the UGLY: The Dynamics of U.S. Production Declines and Eventual Rebound is the 3rd in RBN Energy’s 2016 Drill Down report series, a suite of monthly reports covering many of the key issues expected to impact the markets for crude oil, natural gas and natural gas liquids. Drill Down reports are part of RBN Backstage Pass™ premium resources that also include Blog Archive Access, Spotcheck Indicators, Market Fundamentals Webcasts, Get-Togethers and more. By subscribing to RBN’s Backstage Pass™ Premium Services, you plug into our network and get direct access to our premium resources.