If a company expects to consume large volumes of natural gas for decades to come, why not remove at least some price risk by acquiring a working interest in gas production assets? Florida Power & Light (FPL), which burns more gas than any other US electric utility, recently asked regulators to permit the company to co-develop up to 38 gas production wells in the Woodford Shale with PetroQuest Energy, and to establish rules to let it make other, similar investments in the future. FPL is not first in its plan to acquire gas interests as a physical hedge; leading fertilizer and steel companies already have taken that plunge, with positive results. Today we examine what could become a trend: Major gas consumers buying a piece of the gas production action.

US shale gas production is at record levels and rising and the forward gas curve (for Henry Hub futures contracts on the CME NYMEX) suggests gas prices will remain moderate and stable for the foreseeable future. Still, there is always a risk of gas-price volatility in the short term (this past winter’s polar vortex-related price spikes being a recent example; see It’s Sure Been a Cold, Cold Winter), and over the long term increasing demand for gas (new petrochemical capacity, more LNG exports etc.) may well put upward pressure on gas prices. An understandable desire to mitigate such gas price volatility risk has led FPL—one of the nation’s largest electric utilities and gas consumers—to pursue a plan to invest in natural gas production assets to supply a portion of its expected gas needs. This plan is a physical hedge where the utility (FPL) takes ownership in producing assets to provide a source of physical supply in order to protect itself from increases in the market price for gas relative to the cost of production.  FPL is paying a portion of the the cost of its gas “up front”, effectively fixing the price of gas for the duration of production from those producing assets.  Under the plan, which must be approved by the Florida Public Service Commission (FPSC), FPL would pay a share of development and operating costs for PetroQuest Energy gas production wells in a dry gas portion of the Woodford Shale play in Pittsburg County in southeastern Oklahoma, and receive in return a portion of PetroQuest’s interest production from those wells for shipment east (see yellow star and black dotted line in Figure #1). 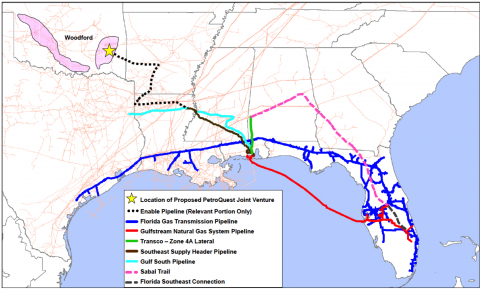 FPL generates 62% of the electricity consumed in Florida, and two-thirds of the utility’s output comes from gas-fired units; in 2013, FPL burned 550 Bcf, or about 1.5 Bcf/d (on hot, steamy days it can burn 2 Bcf/d). FPL told the FPSC in late June 2014 that by securing a portion of its gas through the PetroQuest deal at the cost of production rather than at market prices, the utility will mitigate or hedge the upside price risk associated with purchasing gas. In other words, by paying more or less fixed and in some cases (where drilling efficiency is improving) declining production costs for gas, FPL will be protected from any increase in market gas prices over and above the production costs in the marketplace. By the utility’s figuring, FPL and its customers will save $107 million in gas costs over the decades-long life of the wells. Of course if production costs exceed market prices, FPL risks paying more for its gas this way, but this scenario is less likely because new drilling activity would be curtailed if prices were too low to make the wells economic.

To access the remainder of Sweet Gas o’ Mine—Big Gas Consumers Seeking Stakes in Gas Production you must be logged as a RBN Backstage Pass™ subscriber.