US waterborne exports of propane, normal butane and isobutane – known collectively as liquefied petroleum gases or LPGs - are growing rapidly – up from 148 Mb/d in 2011 to 316 Mb/d in 2013. RBN expect these volumes to continue growing from 466 Mb/d this year to 825 Mb/d in 2018 as LPG production from gas plant processing increases more rapidly than domestic demand. The two largest export terminals operated by Enterprise and Targa will add 400 Mb/d of capacity between 2013 and 2018 and as many as 8 more terminals could be built. Today we begin a deep dive series into LPG shipping.

We begin our odyssey with a primer on the weights and measures used in international waters. From the US perspective, understanding the international trade in LPG’s requires coming to grips with unfamiliar terminology used to measure quantities, prices and shipping volumes. In this country we keep track of propane and butane quantities in units of volume the same way we do crude oil - in barrels containing 42 gallons. Those units of volume are measured at a standard temperature of 60 degrees Fahrenheit – don’t forget that volumes expand or contract as the temperature changes. Convention in the US is to keep track of movements in thousands or millions of barrels per day (MMb/d). Prices are quoted and traded in cents per gallon (Cnts/Gal). To help foreign adventurers understand how these measures change once LPG volumes cross the terminal dock onto vessels bound for overseas ports, we have created a handy Rosetta Stone (see Figure 1). 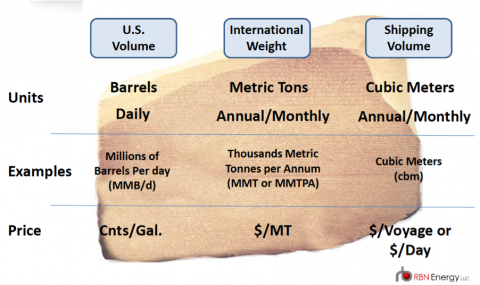 In international markets natural gas liquids and refined products are measured and traded in units of weight (although crude oil is universally measured in barrels – a unit of volume). The good thing about units of weight is that they are absolute – there is no need to worry about standard temperatures until you convert back to volume. The principal unit of weight used for internationally traded LPGs is the Metric Ton (MT). The spelling tonne is used interchangeably with ton but the important distinction to be aware of is the one between metric tons (that contain 2204 lbs) and other variations on the ton such as long tons (a UK measure containing 2240 lbs) and short tons (a US measure containing exactly 2000 lbs). When quoting quantities of metric tons shipped abroad over time it is customary in international markets to do so per month or year - as in thousand metric tonnes per annum (MMTPA)  - rather than the US convention of quantity per days – as in barrels per day (b/d). Thankfully for those looking after the nickels and dimes, US financial power crosses international boundaries – requiring hapless foreigners to carry out their trades in US currency – as in US $/MT (no bitcoin yet).

To access the remainder of Stayin’ Afloat With The LP Gees – US Waterborne LPG Exports I - Rosetta Stone you must be logged as a RBN Backstage Pass™ subscriber.