At our School of Energy International LPG session earlier this month, Kelly Van Hull presented RBN’s outlook for global liquified petroleum gases (LPG)  production – showing the US poised to become the world’s top exporter of LPGs within the next year or two - displacing Qatar. While most U.S. LPG exports go to Latin America today, a growing portion will move to Europe and Asia in the future. The limited fleet of very large gas carriers (VLGCs) used to ship LPG is growing rapidly with a record new build order book of 72 ships – 45 percent of today’s fleet of 161 vessels. Spot freight rates assessed daily by London’s Baltic Exchange are also at record levels of $82/MT this week. Today we take a closer look at international LPG ship chartering.

This blog series is designed to help RBN members understand the nuances of the international LPG market in light of increasing U.S. waterborne exports of propane, normal butane and isobutane – known collectively as liquefied petroleum gases or LPGs. From the U.S. perspective, that involves getting to grips with unfamiliar terminology used to measure quantities, prices and shipping volumes overseas. We began our odyssey in Episode 1 with a primer on international weights and measures. Those measures include quantities in metric tons (MT) rather than Bbls and ship volumes in cubic meters (Cbm). We also provided conversion factors between U.S. volumes, international weights and LPG shipping volumes. In Episode 2 we looked at the different ships used to carry LPGs. Waterborne LPGs are transported in specialized vessels that use either cooling or pressure techniques to maintain cargos in liquid state that would otherwise be gases at room temperature. Liquefying the cargo allows a far greater volume to be carried. We reviewed the four main gas carrier vessel types from the largest – very large gas carriers (VLGCs) down through large gas carriers (LGCs), medium gas carriers (MGCs) and smaller gas carriers. This time we dig deeper into the freight chartering process for VLGCs - the vessels most widely used in the international LPG trade.

Figure #1 below provided by our friends at Joachim Grieg & Co. shows total LPG fleet capacity since 1999 – indicating that the majority of waterborne capacity is in VLGC ships (shown in orange on the chart). In 2013 VLGC capacity was 12.8 million Cbm out of 20 million Cbm total. Large and medium carriers (green and purple on the chart) represented 4 million Cbm of capacity in 2013 and the remaining small carriers (in blue) another 6 million Cbm.  At less than 20 million MT deadweight, total LPG fleet capacity is tiny compared to bulk tankers that carry oil and petroleum products (~ 500 million MT) or dry cargo ships (~600 million MT). As we mentioned last time there are 161 VLGCs operating today. There is also now a record new build order book of 72 vessels reflecting owner’s desire to capitalize on booming US LPG exports. 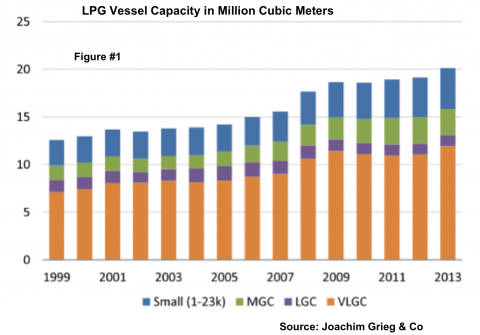 Given that shippers only rarely own VLGCs themselves, exporting LPG requires chartering a vessel from an independent ship owner.  Transportation costs or freight rates for international LPG shipments (and many other vessel types, for that matter) are normally based on one of the following four contract types:

Indications of current market freight rates may be obtained from spot or time charter (TC) transactions. Since most vessels are contracted under period charters, there may be insufficient spot transactions to provide a transparent or liquid market. However, the London Baltic Exchange publishes an index assessment of spot rates that is arrived at by an industry panel daily. The resulting Baltic LPG Index (BLPG) provides a benchmark for the industry that is used in other pricing formulas such as COAs. The BLPG is based on a specific voyage route and cargo size – from Ras Tanura, Saudi Arabia to Chiba, Japan round trip – laden (full) on the outbound journey and ballast (empty) on the return trip, carrying a fully refrigerated cargo of 44 thousand MT (+/- 5%) propane, butane or a mixture. Freight rates linked to the BLPG may be adjusted for other routes.

To access the remainder of Stayin’ Afloat With the LPGees – US Waterborne LPG Exports Part 3 - Freight Rates you must be logged as a RBN Backstage Pass™ subscriber.