The crude oil storage and distribution hub in the small town of Cushing, OK, is a marvel. With more than 90 MMbbl of tankage, 3.7 MMb/d of incoming pipeline capacity and 3.1 MMb/d of outbound pipes, Cushing’s nickname — “Pipeline Crossroads of the World” — is spot-on, not hyperbole. However, like a lot of other U.S. energy infrastructure in the Shale Era, Cushing’s role has been in flux. Permian oil production has been surging, the ban on U.S. oil exports is a fading memory, and the Gulf Coast — not Cushing — is where most U.S. crude production wants to go, for its concentration of refineries and export docks. That is not to say that Cushing is no longer important. Far from it. Today, we begin a blog series on how Cushing’s role has been morphing and why the Sooner State trading hub still provides critical support to producers, midstream companies and refineries alike. 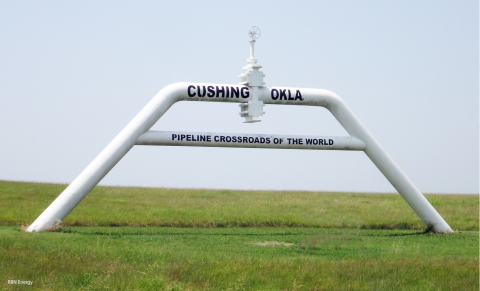 If we were to make a list of the Seven Wonders of the Energy World, the crude hub at Cushing, OK (population, about 7,900) would be at the top of the list. Cushing area storage facilities cover almost 5,000 acres and include about 350 huge, aboveground storage tanks, some of which are as much as 300 feet in diameter, 48 feet tall and capable of holding up to 600 Mbbl. A few tanks can receive oil at rates of more than 40 Mbbl per hour. There are a total of 14 major storage operators in the Cushing area, with three companies — Plains All American, Enbridge and Magellan Midstream Partners — owning about 60% of the total storage capacity there. Cushing has had a major role in the “erl bidness” (translation: oil business) for more than 100 years. It began as an oil field, morphed into a refinery center, then grew as a pipeline hub due to its central location between the Gulf Coast, the Midcontinent and Midwest. For decades, it was the domain of integrated oil majors, which used Cushing as a way station between their producing basins and their refineries. In the 1990s, as integrated companies divested of midstream assets, the ownership and control of Cushing transitioned to midstream companies, where it is held today. It is the delivery point for the CME/NYMEX crude oil futures contract, the most actively traded crude futures contract in the world, and the Cushing oil price serves as the underlying benchmark used to value most crude produced in the U.S. Cushing is a diverse, flexible and liquid physical market, which over the decades has survived numerous shifts in U.S. crude oil flow patterns, surpluses, shortages and other disruptions. If any one location can lay claim to the title, “Center of the U.S. Crude Oil Market,” Cushing is it.