Last week US crude oil production reached 8.4 MMb/d – its highest level since October 1986 – up 50 percent since the start of 2011. The engines of growth are Texas and North Dakota and within those states, horizontal drilling in tight oil shale are generating the most exciting results. And while production is soaring, proved reserves are increasing even faster – laying the groundwork for continued output. Today we look at past, current and future US crude production growth. 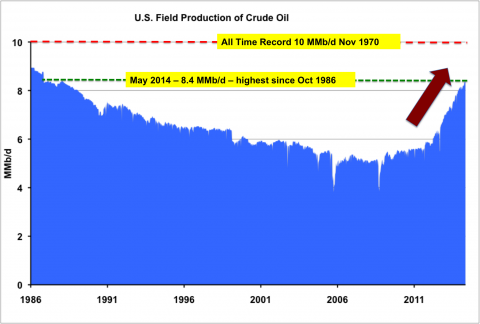 While crude oil production is up sharply in the past three years, there is still room for imports to meet overall US demand, although these are at their lowest level since 1998 (about 7.0 MMb/d) and increasingly are sourced from Canada (about 2.5 MMB/d of the total), up 0.6 MMb/d over the past three years. But even as imports decline, US refineries have not been able to keep pace with rising crude production – much of which is lighter in density (API Gravity) than they are configured to handle (see Charge of the Light Brigade). The mismatch in crude quality is compounded by US Department of Commerce regulations banning the export of crude oil except to Canada and in specific circumstances from Alaska or California (see I Fought the Law). With exports restricted and refineries not configured to consume all the rising production, crude inventories reached their highest level since EIA records began – at just under 400 MMbbl for the US as a whole at the end of April 2014, with more than half those barrels being stored in the Gulf Coast region (210 Mb/d as of May 16, 2014). 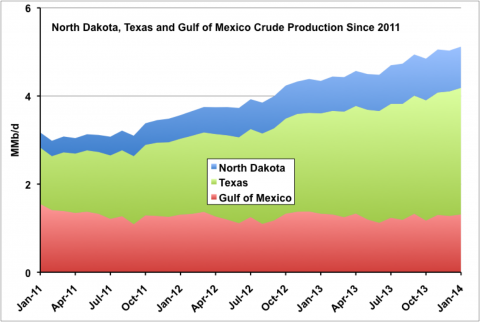 Within the State of Texas, the surge in Eagle Ford production has been meteoric – rising from 50 Mb/d at the start of 2011 to 1.4 MMb/d today. But the Permian Basin in West Texas has been producing oil for nearly 100 years and output there has recently begun to take off again. This long running West Texas oil and gas rainmaker has experienced significant increases in drilling – specifically horizontal drilling – in the past few months resulting in even faster production growth (see Stacked Odds – Why Producers Like Their Odds in the Permian). Our latest RBN Energy Drill Down Report on production drilling economics aptly illustrates how producers who crack the horizontal drilling and hydraulic fracturing code in the Permian can expect typical rates of return of 60+ percent (for more information on the Drill Down Report – available only to our Backstage Pass subscribers, see Stacked Deck in the Permian). Overall, the Texas Railroad Commission reported recently, Texas produced more oil in 2013 than it had in decades and is poised to surpass those totals again in 2014 as the number of wells drilled has nearly doubled so far this year.

To access the remainder of Like a Bat Out of Hell? The US Crude Oil Production Engine you must be logged as a RBN Backstage Pass™ subscriber.