Over the past 4 years, billions of dollars have been committed to building new petrochemical olefin crackers for ethane and export facilities for both propane and ethane. All these projects were expected to take advantage of booming domestic natural gas liquids (NGL) production. Projected returns on these investments were based on the assumption that global crude oil prices would remain high relative to domestic NGLs – providing competitive margins for U.S. petrochemical plants and attractive arbitrage opportunities in export markets.  The oil price crash in the latter half of 2014 has undermined that assumption and now threatens the economics of many of these projects. Today we preview the latest RBN Energy Drill Down Report addressing the consequences for NGL infrastructure of lower crude prices.

NEW !! It’s Not Supposed To Be That Way - What Happens to New NGL Infrastructure If Production Growth Slows?

We have just released the fifth in our 2015 Drill-Down report series for Backstage Pass subscribers examining the impact of low crude prices on new infrastructure projects.

More information about It’s Not Supposed To Be That Way here.

NGL production volumes have been surging since 2007.  The left hand chart in Figure #1 shows propane volumes increasing nearly 130% since the beginning of 2007, up from 480 Mb/d to around 1,100 Mb/d in March 2015.  The right chart shows ethane volumes growing about 60% from 670 Mb/d in 2007 to 1,080 Mb/d in March 2015. Ethane production would have grown much more if there was a market for the liquid ethane barrels.  Instead up to 500 Mb/d of ethane is being rejected – sold as gas into the natural gas market (see Where Has All the Ethane Gone). Midstream companies have invested heavily to handle the bonanza of incremental supply.  Gathering systems, gas processing plants, NGL pipelines, fractionation facilities, NGL storage facilities and other NGL infrastructure were all developed, built and/or expanded. All that was needed was to find markets for booming NGL supplies. 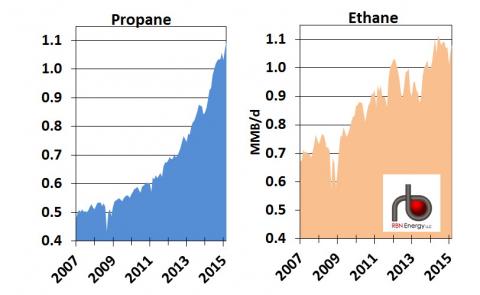 Two markets emerged to soak up excess supplies of ethane and propane. The first was U.S. petrochemical steam cracker plant operators who saw a tremendous opportunity in 2011 to expand their use of low priced ethane to leverage a competitive advantage and make big margins producing ethylene and other petrochemicals. Their advantage stemmed from the fact that international competitor steam crackers typically use naphtha (a gasoline-like product mostly produced from refining crude oil) as a feedstock. With crude oil prices over $100/Bbl in international markets in 2011, that meant high naphtha prices which translated into high feedstock costs for international steam crackers.  With naphtha-fueled international steam crackers typically setting the market price for ethylene, the margins for U.S. plants using ethane became very lucrative. So existing steam crackers in the U.S. with the ability to switch feedstocks did so with a vengeance.

Figure #2 shows the changes in the feedstock composition for all U.S. steam crackers from 2005 through 2014.  Ethane went from supplying 44% of steam cracker feedstock in 2007 to supplying 65% of feedstock in 2014.  The growth in ethane’s share came primarily at the expense of naphtha, which went from supplying 24% of feedstock in 2007 to only 7% in 2014. Presumably assuming that the favorable ethane cracking economics would continue, petrochemical companies invested in capacity expansions – with projects to add 1.3 MMlbs/yr of primarily ethane-only steam cracker capacity coming online this year (2015). And they also are investing in a further 17.8 MMlbs/yr of new ethane-only capacity that is currently under construction and due online in 2017-18. Final investment decisions are awaited on at least another 8 future projects.

To access the remainder of It’s Not Supposed to Be That Way – What Happens to New NGL Infrastructure if Production Growth Slows? you must be logged as a RBN Backstage Pass™ subscriber.