Lately the ethane market seems out of whack.  Ethane production continues to increase even as it’s become the lowest margin (highest cost) feedstock for Gulf Coast petrochemical crackers – it’s main market.  Ethane production by processing plants has been at an all-time high since June this year even as ethane prices fell to historical lows.  Meanwhile, ethane inventories have fallen from their recent peak in July.  How can all that make sense?  Today we speculate as to what may be going on.

Ethane was the highest margin (lowest cost) feedstock for Gulf Coast petrochemical crackers for almost all of the past five years as shale production resulted in increasing supplies putting downward pressure on ethane prices.  Most of the time it was a much more profitable feedstock than other NGLs -- propane, butane or natural gasoline, and vastly better than naphtha and gas oil.  Over the 2013-2014 period, the margin for ethane on the Gulf Coast averaged about 50 cents per pound of ethylene ($.50/lb), while propane came in at $.42/lb. Normal butane was about $.40/lb while natural gasoline brought up the rear at $.24/lb.  Now as of the first week in 2015, those numbers are flipped around.  The best margin is propane, still at $.42/lb, while butane is at $.39/lb and natural gasoline is $.37/lb.  Poor ethane is sitting at $.34/lb, partially due to more dramatic price declines for the other NGLs and partially because of the impact of lower ethylene prices.  Granted this is still a pretty darned good margin from a historical perspective, so it’s not like the petchems are dealing with anything like what oil producers are going through right now.  But still, it is a big reversal for the margin on the NGL which was supposed to be the rising star of a half-dozen new world scale petrochemical plants expected to be completed between 2017 and 2020. [We calculate these petrochemical margin numbers each day and post them on the website for Backstage Pass subscribers.  See Spotcheck Petchem Margin Graphs] 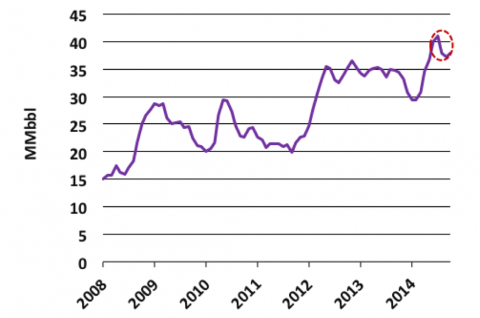 To access the remainder of Where Has All the Ethane Gone, Long Time Rising? Cheap Ethane Used as Fuel Impacts Balances you must be logged as a RBN Backstage Pass™ subscriber.