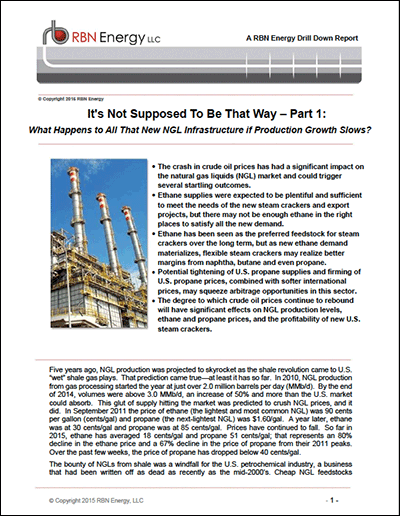 Five years ago, NGL production was projected to skyrocket as the shale revolution came to U.S. “wet” shale gas plays. That prediction came true—at least it has so far. This glut of supply hitting the market was predicted to crush NGL prices, and combined with the crash in crude oil prices, it did. Over the past couple of weeks, propane prices have dropped below 40 cents/gallon while ethane languishes below 20 cents/gallon.

The bounty of NGLs from shale has been a windfall for the U.S. petrochemical industry. New ethylene plants have been announced and at least four are under construction. And new terminals to export U.S. ethane have also been announced, along with orders for new ships to move the ethane overseas. Much of this infrastructure is currently under construction. The NGL-related infrastructure development frenzy goes beyond ethane. A glut of propane supply has developed and the apparent solution to this imbalance is exports. The terminal and shipping infrastructure to support a much higher level of propane exports will be available over the next year.

Most of this investment in infrastructure to use and export both ethane and propane was justified on three key assumptions:

As of spring 2014, belief in these assumptions appeared to be completely rational. Then the world changed. With lower crude and NGL prices, production statistics for crude oil--and NGLs--flat-lined. A scenario of lower NGL production became plausible, calling into question assumption #1. If NGL production were to decline at the same time new petchem and export demand were coming online, then assumption #2 could be at risk: NGL prices, particularly those for ethane and propane, might not remain low relative to naphtha. Also, if crude oil prices were to remain soft, that would hold naphtha prices down, nullifying assumption #3.

This report examines the possibility that all three of these assumptions may be wrong, and the implications that follow from such a scenario. Due to the scope and importance of these potential developments, It's Not Supposed To Be That Way covers more ground than most of RBN’s Drill Down reports. Consequently it is being provided in two parts. This Drill Down report is Part 1.

In addition to this two part Drill Down report series, RBN is providing a private briefing service for organizations interested in the details of our analysis. These are two hour sessions held in your offices or RBN’s Houston office that cover all of our findings in both Part 1 and Part 2, and are available now. For more information, please contact Paige Hambric, info@rbnenergy.com or (888) 613-8874.

It's Not Supposed To Be That Way: Ethane, Propane and NGL Infrastructure (Part 1) is the fifth of RBN Energy’s Drill Down report series, a suite of twelve reports coming from RBN during 2015 covering many of the key issues expected to impact the markets for crude oil, natural gas and natural gas liquids.