Recent rumors coming out of Washington DC suggest that changes to US regulations that severely limit exports of US crudes are being discussed with a view to changes – perhaps even repeal. One idea that keeps popping up is a change to allow the export of lighter hydrocarbons that have a high API Gravity (above 55 or some other number), classified by the US rules as crude, but known to the rest of the world as condensate. Allowing the export of such field condensates could alleviate an oversupply glut of these lighter hydrocarbons that US refineries are not best configured to process. Today we ponder the impact of an end to the prohibition of condensate exports.

As we have described in previous posts, condensates are light hydrocarbons containing a significant percentage of naphtha range material.  There is no universal standard for what defines a condensate, but some number between 50 and 55 degrees API gravity is typically used to differentiate condensates from light crude oil (see Fifty Shades of Condensate Which One Did You Mean?). US condensate is arbitrarily divided into two broad categories. The first is lease condensate produced at or near the wellhead when it condenses from natural gas at surface temperature and pressure. Some lease condensate is also produced at the wellhead in stabilizer units designed to remove more volatile hydrocarbons from crude. The second category is plant condensate, also known as natural gasoline, pentanes plus or C5+, that remains suspended in natural gas at the wellhead and is removed at a gas processing plant (see Like A Box of Chocolates – The Condensate Dilemma). Both categories of condensate are substantially similar in composition but the US Energy Information Administration (EIA) arbitrarily defines lease condensate as crude oil and plant condensate as an NGL (pentanes plus). Furthermore, Department of Commerce - Bureau of Industry and Security (BIS) regulations also define lease condensate as crude oil.  As such, lease condensate is included in BIS regulations introduced in the 1970’s to restrict the export of US crude oil except to Canada or in specific circumstances from Alaska and California (see I Fought the Law).  Thus lease condensate exports are prohibited even though plant condensate exports are perfectly legal., 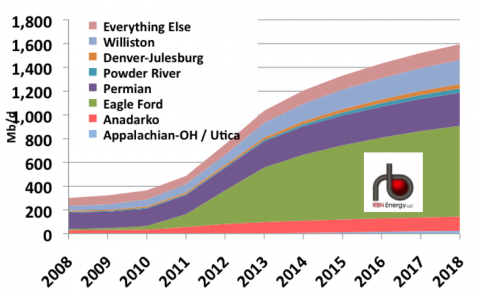 While production of lease condensate is booming, the market for this very light hydrocarbon is rather limited. The obvious solution to the condensate market challenge is to process it like crude oil as a refinery feedstock. However that is hard to do because refiners have a low opinion of condensate, which is currently flooding the Gulf Coast market (see Don’t Let Your Crude Oils Grow Up to be Condensates). Part of the problem is quality – the wide variation in specifications like the API gravity of condensate and part is that most Gulf Coast refineries are not configured to process large quantities of very light crude because it can overwhelm their downstream upgrading capacity. As a result, lease condensate is a buyer’s market in the US at the moment – especially in the condensate rich Eagle Ford basin. Producers suffer unwanted discounts from refiners – of up to $20/Bbl at the Gulf Coast versus light sweet crude benchmark Louisiana Light Sweet (LLS).

In our view, the disposition and price impact of light crude surpluses are some of the most important issues in the crude oil and petroleum product markets today, and will continue to be for the next few years – regardless of what happens to BIS regulations.  For that reason, RBN has joined with Turner, Mason and Company to provide a conference focused specifically on this topic.  “Surviving the Flood of Light Crude Oil” is scheduled for August 19-20 in Houston, and is designed around many of the principles used at RBN’s School of Energy, including laptop computer access to all presentation materials and spreadsheets in real time, structured content from RBN and Turner Mason experts, and no executive project sales-pitches. Register now while space is still available. For more information on the conference, you can download the brochure here.

To access the remainder of Imagine There’s No Export Ban – No Need to Split The Condensate you must be logged as a RBN Backstage Pass™ subscriber.