Way Down in the Hole, Part 10 - Can the Carbon-Capture Industry Grow as Quickly as It Needs To?
Get our Daily Blog Email

Mexico probably has enough shale gas to meet its needs ‘til the vacas—or cows—come home. For technological, security and other reasons, though, it will take years for that now-trapped gas to be tapped on a large scale. In the meantime, Mexico is turning to U.S. gas suppliers, and billions of dollars of new pipelines are being built to transport vast amounts of gas south of the border from the Permian Basin, the Eagle Ford and other plays to run Mexican power plants and factories. Today we consider recent developments in U.S. gas exports to our southern neighbor.

Oil has been dominating the headlines lately in Mexico —not just because of tumbling crude prices but also due to the recent proposal by Petróleos Mexicanos (Pemex), the state-owned oil company, to import up to 100 Mb/d of light crude and condensates from the U.S. in exchange for heavier Mexican crude. The bigger news in U.S.-Mexican energy relations, though, may be the accelerating pace of natural gas exports from Texas, New Mexico and other southwestern states. We’ve previously discussed expanding demand for gas supplies in Mexico and U.S. plans to export gas across the Rio Grande to meet them (see Headed Down to Mexico). And for good reason—those exports now total 2.4 Bcf/d and are forecast to hit 4 Bcf/d by mid-2017 and 4.6 Bcf/d by mid-2018 (see Figure #1). 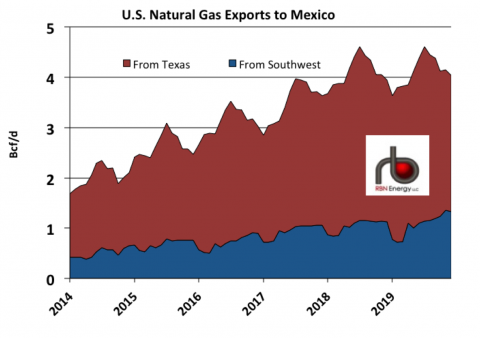 As we said in our most recent look south of the border (see No Need for Mexicali Blues), the expansion of gas-fired power generation accounts for 70% of the forecasted growth in Mexico’s gas requirements over the next dozen years; by 2027, combined-cycle and peaking units there will consume 6.1 Bcf/d—twice what they use today. And while Mexico’s Burgos Basin (an extension of the Eagle Ford) and other shale areas (most of them in the easternmost third of the country) are said to contain vast amounts of oil and gas, Pemex and Comisión Federal de Electricidad (CFE, the state-owned utility) do not expect those resources to be tapped extensively for domestic use any time soon. Why? As we explained in “Oh Rio, Rio—Gas Across the Rio Grande”, Mexico’s shale areas feature unusually complex geology whose code may prove hard to crack. The areas also lack needed road and water infrastructure, and—worst of all—they pose real security risks to drillers due to the violent drug cartels there. So for now, Mexico’s focus is on meeting its gas needs primarily through greatly expanded imports from Texas and the rest of the U.S. Southwest. Imports depend on pipelines, of course, and a lot has been happening in that regard. Let’s look at some new (and important) gas pipelines that have come online the past few months, and at a few others that are under construction. Taken together, these new and planned pipelines will give us a good idea of how much U.S. gas Mexico may be able to import through the rest of this decade and the beginning of the 2020s.