After a year’s delay due to permit issues, Enbridge now expects the expanded and reversed 300 Mb/d Line 9B pipeline to Montreal will come online next month (November 2015). The pipeline is an important cog in Enbridge’s Eastern Access and Light Oil Market Access expansion projects and will supply mostly light crude to two refineries in Quebec. As we explain today, the payload will travel a winding route to get to Montreal.

In previous blogs (see Take A Pipe On The East Side) we reviewed the huge Enbridge Mainline system (made up of multiple pipelines) which delivers up to 2.5 MMb/d of hydrocarbon liquids (mainly heavy crude from Western Canada) to the US border in Minnesota where the system name changes to Lakehead (see the map in Figure #1). At Clearbrook, MN Enbridge Lakehead receives incoming light sweet Bakken crude from the Enbridge North Dakota system (purple arrows on the map). Once it reaches the Great Lakes at Superior, WI, the Lakehead system winds its way around Lake Michigan in two directions - flowing light crude north on Line 5 direct to Sarnia, Ontario (red arrows) while the majority of its payload travels south along two routes – one through Chicago that mostly feeds refineries in the Windy City and the other further west to Flanagan, IL (green arrows). The Flanagan terminal in Pontiac, IL is the central pivot point in the Enbridge US system with crude flowing from there either northeast through Illinois to Griffith, IN and then back into Canada at Sarnia or southwest to Cushing, OK (in the future crude will also flow south from Flanagan to Patoka, IL). Crude that will end up in Montreal once Line 9B is reversed all has to pass through Sarnia – either southeast from Superior on Line 5 or northeast from Flanagan to Griffith and then east on Line 6B. 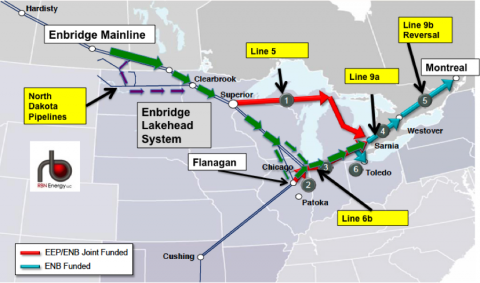 The 240 Mb/d Enbridge Line 9 stretches from Sarnia, Ontario to Montreal, Quebec (see Figure #2). The pipeline was originally built in the 1970’s to feed eastern Canadian refineries with crude from Alberta via the Enbridge Mainline. It was then reversed in the 1990’s to feed imported crude from Montreal when Western Canadian crude became too expensive. By way of two separate projects over the past 2 years Enbridge has reversed Line 9 again so that it can feed crude from western Canada and North Dakota to Montreal via Line 6B. The Line 9A portion of the pipeline reversal (blue line in Figure #2) is already complete and began transporting crude oil east from Sarnia to North Westover, Ontario in August 2013. In March 2014, Enbridge received approval from Canada’s National Energy Board to reverse the remaining portion, known as Line 9B (red line on Figure #2) to flow east from North Westover to Montreal, Quebec and to increase the capacity by 60 Mb/d to 300 M b/d. The target in-service date for the Line 9B reversal was originally Q4 2014. Issues with permitting and testing have delayed the opening by roughly a year to the end of 2015. Last week Enbridge announced tariff rates for Line 9B commencing November 14, 2015 – suggesting the pipeline will come online then. The eastbound Line 9B is expected to carry a mixture of light crude (250 Mb/d Enbridge estimates) and heavy Western Canadian diluted bitumen (dilbit – see Heat It) crude (50 Mb/d). The tricky part of all this for Enbridge has been beefing up the existing Lakehead pipeline system to deliver additional crude at Sarnia to supply Line 9.

To access the remainder of Come On The Sloop 9 B? Enbridge Montreal Line Reversal Offers Complex Journey For Bakken Crude you must be logged as a RBN Backstage Pass™ subscriber.