Part of the Plan, Part 3 - The St. James Crude Oil Hub Readies for Capline-Related Changes
Get our Daily Blog Email

There is no doubt about it: With its location, infrastructure and long history, Mont Belvieu, Texas, is and will remain the center of the NGL fractionation world. It is worth noting, though, that fast-increasing production in the “wet” Marcellus and Utica has been spurring development of a new NGL hub of sorts in southwestern Pennsylvania, West Virginia and eastern Ohio. But the fractionation sector in the Utica/Marcellus is an orange to Mont Belvieu’s apple—that is, the infrastructure needed to separate NGL into its various purity products is evolving in an entirely different (and, well, more “fractionated”) way near Houston, PA than it did near Houston, TX. Today we explain this and summarize new fractionation-related developments in the Utica/Marcellus.

This time we turn our sights to the Utica and wet Marcellus. As we said in our They Long To Be Close to You series, wet gas production in the Utica/Marcellus is taking off like a rocket, and midstream companies are scrambling to keep up by reversing existing gas pipelines and building new ones. Critical elements in the region’s fast-developing infrastructure, of course, are new gas processing plants and, given the significant and growing volumes of NGLs in the wet gas there (see Figure #1, which assumes 80% ethane rejection), new NGL-separation capacity of three types: de-ethanizers, C3+ facilities, and C2+ fractionators (the only type seen in Mont Belvieu). 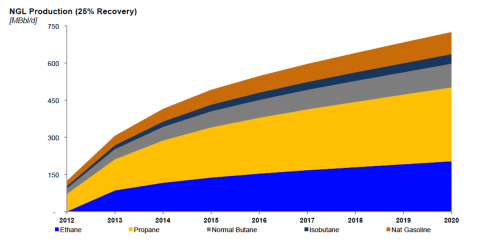 As their name suggests, de-ethanizers separate ethane, or C2, the lightest of the five NGLs, and the volume-dominant NGL in almost all wellhead gas streams.   C3+ units, in turn, separate the other four NGLs—propane (C3), normal butane (NC4), isobutane (IC4) and natural gasoline (C5+)—but not ethane. C2+ facilities, finally, remove everything from C2 (ethane) through C5+ and, since they fractionate or separate all NGLs, they are simply called fractionators. If you think the NGL-separation sector in the Utica/Marcellus sounds more complicated than it is in Mont Belvieu, where all of the NGL-separation facilities are C2+ fractionators, you are correct. First of all, pre-shale revolution, the production of natural gas in what is now the Utica/Marcellus was limited to conventional wells. Those wells produced (and still produce) only modest amounts of gas with only modest quantities of NGLs.  That meant the facilities to separate NGLs only needed to be modest in size.  Furthermore, with no demand for ethane in that part of the country, there was no real need for ethane removal, so the facilities that got built were C3+ units that left whatever ethane (C2) there was in the residue gas stream to be sold as natural gas.

To access the remainder of Talkin’ ‘Bout My F-F-Fractionation—Adding Capacity and Rationalizing in the Utica/Marcellus you must be logged as a RBN Backstage Pass™ subscriber.