Data from the new Energy Information Administration (EIA) monthly report on crude-by-rail (CBR) shows that shipments from Canada increased from less than 10 Mb/d two years ago in January 2012 to over 130 Mb/d in January 2015. The increase in CBR movements mirrors increasing Canadian crude exports to the U.S. – the majority of which are still pipeline movements. Today we look at the destination markets for Canadian CBR in the light of congested pipeline capacity out of Western Canada.

In Episode 1 of this series we introduced new EIA monthly data on CBR movements in the U.S. and Canada. The data derives from carload rail movements captured by the Surface Transportation Board (STB) and various estimates of Bbl per carload. The EIA report is updated monthly with recent months being estimates based on historical correlations. We found that the growth in U.S. CBR shipments (up from 20 Mb/d in January 2010 to just under 1 MMb/d in December 2014) closely tracked expanding U.S. crude production (up 71%) over the past four years. CBR has proven to be a flexible solution for producers waiting on pipeline infrastructure. But while the volume of CBR movements increased, favored origins and destinations changed considerably over that time period. Our analysis showed that increasing volumes of crude moved by rail out of the Midwest (mainly from North Dakota) were destined for the East and West Coasts –routes that have no competition from pipelines and where refiners have invested in unloading infrastructure meaning they are more committed to rail. We noted that volumes shipped to the Gulf Coast from North Dakota fell off after crude price differentials between the inland market represented by West Texas Intermediate (WTI) crude at Cushing and the coastal market represented by Brent crude, narrowed. In situations where CBR competes directly with pipelines the higher cost of rail is a disadvantage, unless pipeline congestion increases crude price differentials enough to justify higher rail freight costs. This time we look at the growth of rail movements out of Canada. 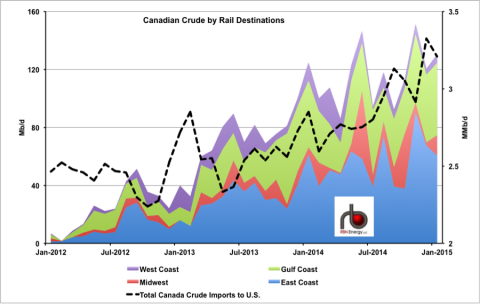 The chart in Figure #1 shows EIA estimates of CBR movements out of Canada to the U.S. by destination region since the beginning of 2012 (in Mb/d – shaded areas against the left axis). The total CBR imports increased over the period from 7 Mb/d in January 2012 to 130 Mb/d in January 2015. We added the EIA numbers for total U.S. crude oil imports from Canada (black dashed line, right axis) as a comparison. Just as we saw for U.S. CBR movements as a whole in Episode 1, the growth in CBR movement is strongly correlated to growth in overall Canadian crude imports to the U.S. (basically Canada’s only market for crude) up 30 % over the period from 2.5 MMb/d to 3.2 MMb/d – mostly in the form of heavy bitumen crude from Western Canadian oil sands. As we have discussed previously, delays in pipeline permitting – including the Keystone XL project – have led to capacity constraints out of Alberta (see They Did It Seaway). The lack of pipeline capacity has led to Canadian producers in Alberta having to swallow big discounts versus prices in the U.S. Midwest at Cushing, OK or at the Gulf Coast. Those discounts have encouraged the use of CBR as an alternative to pipeline transport. Canadian CBR shipments have also involved shippers using coiled and insulated rail tank cars to carry bitumen crude with less of the diluent that has to be blended into bitumen to enable it to flow in pipelines (known as “railbit” - see the “Go Your Own Way” series from last summer). The idea is that by adding less diluent than would be required to ship by pipeline, rail transportation can save costs that help it compete with less expensive pipeline movements.

To access the remainder of A Look At The (Crude-by) Rail Track Record – EIA Monthly CBR Movements Ex-Canada you must be logged as a RBN Backstage Pass™ subscriber.