Energy marketeers are faced with a conundrum. Should the focus be on producing, processing, and marketing the hydrocarbon-based energy that the world needs today? Or is it time to go an entirely different direction toward net-zero emissions, renewables, and battery-powered everything? The answer, of course, is both. That means living, working, and producing hydrocarbon-based products in today's world while at the same time preparing for and investing in the world to which we’re headed. You might think of it as kind of a mild case of schizophrenia; we live in one reality, but we must think in terms of an entirely different future reality. That was a core theme for RBN’s Fall 2021 School of Energy: Hydrocarbon Markets in a Decarbonizing World. In today’s RBN advertorial blog, we provide our key findings and highlights from the conference curriculum.

Last week we conducted our 15th School of Energy. Like always, our curriculum included our assessments of crude oil, natural gas and NGL markets and our forecasts for what’s coming next. We work through these topics using RBN’s fundamental market models – Excel spreadsheets that grapple with a wide range of issues such as production economics, production forecasting, crack and frac spreads, gas processing economics, ethane rejection, and petrochemical feedstock selection, among many other topics. But this time around, in a School of Energy first, we added an entire module dedicated to the energy transition. This year’s central themes spotlight the relationships among the crude oil, natural gas, and NGL markets and how they have been impacted by the rise of environmental, social and governance (ESG) issues; rising U.S. exports that have strengthened links between domestic markets and global prices; and the impacts of the lingering COVID-19 pandemic on supply and demand.

If you were not able to join us for the live broadcast, you are in luck! The entire 16+ hours of streaming content, plus slide decks and spreadsheets, are available online.

We recorded the entire conference, including the live Q&As, and made it available online, and we’re calling it School of Energy Encore. It’s the next-best thing to being there live and includes downloadable PDF presentation materials and Excel models. The virtual curriculum is organized into six modules and subdivided into 44 sub-modules, most of which are between 15 and 30 minutes long, so you can binge-watch the whole thing, or watch one piece at a time at your own pace over however many days or weeks you wish. You can read the detailed descriptions of each module by clicking on each of the sections here. In the paragraphs below, we’ll summarize some key findings from each major module.

As we come out of a crisis where energy demand was slapped down by COVID-19, the markets are lurching into an entirely different kind of predicament, as the push toward decarbonization has crashed headlong into hydrocarbon supply-and-demand realities, causing crude oil, natural gas and propane volatility to spike over the past year, as shown in Figure 1 below. Net-zero emissions and renewables may be the end goal, but it’s still going to take a lot of hydrocarbons to power the global economy before we get there. If hydrocarbon supply is cut back before there's enough renewables to make up the difference, the results can be very messy market conditions, translating into greater price volatility for all energy supplies. But there’s a lot more going on beyond the headlines as demand responds to COVID-19 recovery, supply continues to be held off the market, exports continue to tie the U.S. more closely to the rest of the world, and getting infrastructure built is more of a challenge than ever. In addition to crude oil, natural gas and NGL markets, this module also includes a close look at the renewables that have taken center stage recently.

We could be at the precipice of an inflection point for the energy industry. U.S. producers have shown a lot of capital discipline — not responding as exuberantly as they may have in eras past to capture the high energy prices seen today — something we’ve rarely seen since the start of the Shale Revolution. But that may be about to change, and some of the majors have discussed an increase in drilling activity. We discuss the basics of conventional and unconventional production, look at the factors that led us to this stage of the game, then examine how producers behave in different price environments. Also featured in this module are sections on RBN’s production economics model, the concepts and methodologies that go into a production forecast, and RBN’s three forecast scenarios for oil, gas, and NGL production.

Crude markets have been on a chaotic ride since early 2020. Things started when COVID-19 forced lockdowns around the country, causing fuel demand to tank. This ran crude prices into the gutter and producers had no choice but to halt drilling and shut wells. Next up was the busiest Atlantic hurricane season on record, which forced Gulf Coast production, demand, imports, and exports up and down like a yo-yo. We also had a presidential election, Winter Storm Uri and the Texas Deep Freeze — not to mention   the industrywide influence of the push toward renewable energy solutions — all of which have had an impact on the fundamentals of the energy markets and on prices. We look at what's driving crude oil markets today, including the recovery from COVID-19 and its Delta variant and their potential impact on fuel demand around the world. This module also includes our analysis of Permian oil infrastructure, flows and constraints; insight on crude quality and the fundamentals of refining; and guidance on using RBN’s crack spread and refinery yield models.

Natural gas prices have been on a steady rise for much of the last year. The Henry Hub price, which was less than $3/MMBtu at the start of 2021, jumped past $6/MMBtu in October. But while prices have eased off in recent weeks, dipping below $5/MMBtu at times ($4.82/MMbtu on Wednesday), a lot of volatility remains, and prices are well ahead of where they were a year ago. But as Figure 2 shows, the forward curve implies that the market doesn’t think these prices are here to stay. Why is that? To answer that, we’ll start with a discussion of gas prices from January 2020 until today, then looking at where the market thinks gas prices are going over the next few years, we touch on a wide range of fundamental topics, including natural gas infrastructure developments, basis differentials, and more. This module also involves a closer look at lurking constraints in Appalachia and the Permian which, coupled with rising demand factors, including growth in North American LNG capacity, could result in a tighter overall supply/demand balance and prices quite unlike what the forward curve suggests. 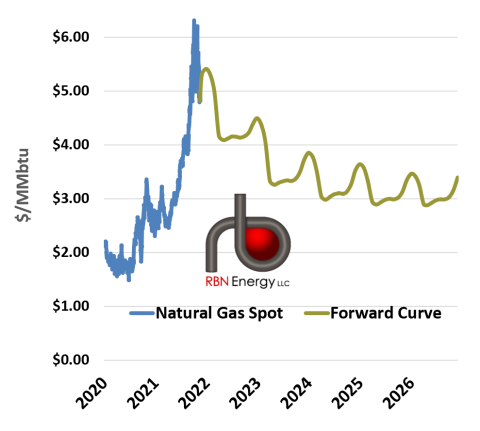 NGL markets have been extremely chaotic this year, with surging exports being a big factor in highly volatile prices. Propane inventories were low going into the winter season, which created a lot of concern for the retail propane sector. Some of those concerns have recently dissipated, with prices off hard over the past few days. In contrast, the ethane market is tightening, and new cracking capacity is in the process of coming online. There’s a lot more going on, including higher ethane exports, steadily increasing NGL production and declining Canadian imports into the U.S. This module provides a thorough review of NGL market developments, explains RBN’s gas processing and ethane rejection models, and lays out the fundamentals of petrochemical feedstock margins.

For the first time, we’ve devoted half a day of our School of Energy to energy transition topics — and if you’ve been following our blogs recently, you know that there’s no more important subject these days. We start things off with a look at decarbonization and the carbon dioxide (CO2) market. We begin with a look at the size of the CO2 problem, the leading sources of CO2 emissions, the well-established U.S. markets for CO2, and key insights on CO2 tax incentives. This module also includes three sections on hydrogen, from current markets and metrics to infrastructure and project updates. Also included is a primer on renewable diesel and the drivers behind that market’s rapid development. California’s Low Carbon Fuel Standard (LCFS) and the wider push for alternative fuels to complement or displace petroleum-based fuels have been the driving force behind the increased investment in renewable diesel manufacturing.

Where Do We Go From Here?

We wrap things up with our view of what it all means. The Shale Revolution brought with it an era of energy abundance, with falling prices, cleaner air, and greater energy independence. But a shadow has been cast over the U.S. upstream, and capital discipline has been a popular topic this year as producers of drill-bit hydrocarbons have not responded to increased prices with increased production. The focus, these days, is on the energy transition and the policies that might hasten its arrival. In this concluding section, we bring together the key topics from the conference and discuss what it all means across the wider energy sector.

That’s a lot of information for us to shoehorn into one blog, all of which was presented at RBN’s School of Energy held November 9-10. Now, with the recorded version, you can watch each of the 44 presentations — more than 16 hours of content — at your own pace. Want more information on the course content? Click here.

"Which Way Are You Goin'" was written by Jim Croce and appears as the 13th cut on Disc 1 of the 2006 extended CD version of Jim Croce's 1972 studio album, You Don't Mess Around With Jim. The album was recorded between 1971-72 at The Hit Factory in New York City, with Terry Cashman and Tommy West producing. Released in April 1972, the album went to #1 on the Billboard 200 Albums chart. Three Top 20 singles were released from the LP. The single "Time in a Bottle" went to #1 on the Billboard Hot 100 Singles chart. The album has been certified Gold by the Recording Industry Association of America. Personnel on the record were: Jim Croce (lead vocals, rhythm guitar), Maury Muehleisen (lead guitar, backing vocals), Tommy West (keyboards, backing vocals), Gary Chester (drums), Joe Macho (bass), and Ellie Greenwich, Tasha Thomas, The Briggs (backing vocals).

Jim Croce was an American folk and rock singer-songwriter. Raised in Philadelphia, Croce started performing in rock groups while attending Villanova University in the mid-sixties. He released his self-funded debut album, Facets, in 1966. Croce signed a record deal with ABC Records in 1972. He released five studio albums, three live albums, 21 compilation albums, and 12 singles. Croce, along with his bandmate Maury Muehleisen, died in a plane crash en route to a show in Sherman, Texas, in September 1973. His single, “I Got a Name,” was released the day after the fatal crash.