Waterborne from the USA—LNG Exports from the Colonies to the UK?

As we approach the 238th anniversary of our independence from the UK, is it possible the British Isles are about to become at least a bit dependent on us, natural gas-wise? With UK gas production falling, and with the aggressive actions of Vladimir Putin raising the specter of gas-supply interruptions from Russia to Western Europe, a case could be made that our jolly-good friends across the pond may be thinking risk-mitigation, supply diversification, and deals to buy more LNG from their former colonies. (They already plan to buy some.) But, as we discuss in today’s blog, gas prices in the UK are currently very low and the situation is, well, complicated.

The UK has substantial gas (and oil) reserves, mostly in the North Sea and the Irish Sea, but production from its fast-maturing gas fields has been declining since 2000, and in 2013 the UK relied on imports for nearly two-thirds of its gas needs. Last year, it used about 2.3 Tcf, or about 6.3 Bcf/d; 35% of the gas consumed was domestically produced, a little more than that came from Norway (the other big North Sea producer), and the rest came from a mix of piped-in imports from the Netherlands and Belgium and LNG imports from Qatar—the last of which accounted for 12% of the UK’s 2013 gas supply (see Figure #1). 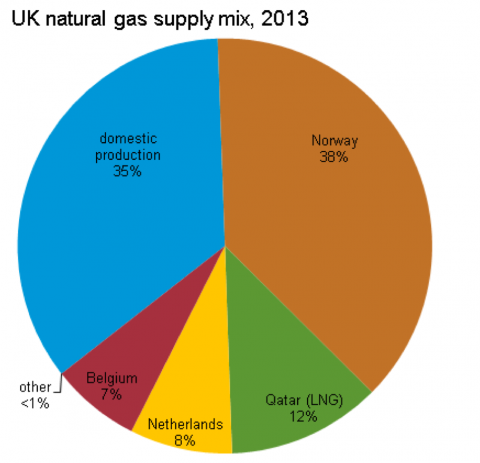 First, a quick lesson on the UK’s gas-transmission infrastructure. Four undersea pipelines—two operated by Shell and one each by ExxonMobil and BP--transport gas from the UK’s offshore fields to coastal landing terminals, and another four pipelines move gas from Norway’s offshore fields to the UK. There also are two undersea pipelines between the UK and continental Europe. First, the Interconnector United Kingdom (IUK) between Bacton, England and Zeebrugge, Belgium. IUK, now 16 years old, is a bi-directional pipeline that, thanks to expansions in 2005 and 2007, can now move up to 2 Bcf/d from the UK to the Continent (called “forward mode”) and up to 2.5 Bcf/d from the Continent to the UK (“reverse mode”). Mostly the IUK runs in forward mode (operated by an international consortium of companies), but it frequently runs in reverse mode during the winter. The other is the Balgzand-Bacton Line (BBL), which can move up to 1.5 Bcf/d from Balgzand, the Netherlands, to the UK. The UK also has developed some impressive LNG infrastructure over the past few years. In 2005, National Grid started up its Grain LNG terminal on the Isle of Grain; it can now receive and vaporize up to 1.9 Bcf/d of LNG. The Teesside LNG terminal, which began operation in 2007 (and which is operated by US-based Excelerate Energy), can receive up to 400 MMcf/d; the Dragon LNG terminal, in Milford Haven, South Wales, came online in 2009 and can import 580 MMcf/d; and the South Hook LNG terminal, also in Milford Haven (and also online since 2009), originally could handle 1.1 Bcf/d but has since been expanded to handle almost twice that (2.1 Bcf/d). Qatar, as we have said, has been the UK’s go-to source for LNG, but of course LNG terminals are agnostic, and US-sourced LNG could start making inroads on the spot market as soon as 2016 (see Golden Years – The Golden Age of US Natural Gas). In March 2013, Centrica—corporate parent of British Gas and a major player in the UK energy market--signed a 20-year agreement with Cheniere Energy to import about 244 MMcf/d (or 89 Bcf/year) of LNG from Cheniere’s Sabine Pass LNG facility (the first phases of which are now under construction in Louisiana) beginning in September 2018. (Under the terms of the agreement, Centrica will buy LNG on a “Free on Board” (FOB) basis. That gives Centrica destination rights for the cargoes for a purchase price indexed to the Henry Hub natural gas price plus a fixed component. Centrica will export gas from Cheniere’s planned fifth LNG train at Sabine Pass. The deal remains subject to several conditions.) Even UK Prime Minister David Cameron weighed in about the Centrica/Cheniere agreement when it was announced, praising how it “will help diversify our energy mix and provide British consumers with a new long-term, secure and affordable source of fuel."

To access the remainder of Waterborne from the USA—LNG Exports from the Colonies to the UK? you must be logged as a RBN Backstage Pass™ subscriber.