U.S. oil and natural gas exploration and production companies, anticipating continuing low crude oil and natural gas prices, have been reshaping their portfolios to focus on a half-dozen top-notch resource plays whose production economics can hold up even through the roughest of patches. The biggest of these asset purchases and sales grab the headlines, but countless other, smaller deals are having profound effects too. Taken together, this piranha-like devouring of E&P assets in the Permian Basin, SCOOP/STACK and other key production areas is transforming who owns what in the plays that matter most, and positioning a select group of E&Ps for success. Today we review highlights from “Piranha!” —a just-released market study from RBN.

If you told U.S. E&Ps three years ago, when crude oil was selling for north of $100/barrel (bbl), that most of them soon would be thriving at crude prices less than half that level they would have questioned your sanity. But that is exactly what happened. Despite predictions of widespread bankruptcies and credit defaults after the plunge in oil prices that started in the summer of 2014, most of the upstream industry has weathered the crisis remarkably well, primarily through the “high-grading” of portfolios, impressive capital discipline, and an intense focus on operational efficiencies.

This has certainly been a different kind of rebound than past ones. In stark contrast to major industry consolidations that followed other price downturns, where the largest companies gobbled up smaller and weaker companies in huge merger and acquisition (M&A) deals, this cycle has been characterized instead by hundreds—if not thousands—of small transactions. E&Ps are concentrating their assets, and building out significant contiguous acreage positions in their core operating areas while generating funds for operations and acquisitions through equity offerings, debt refinancings and sales of non-core assets. The strongest and most aggressive of the U.S. E&Ps have been behaving like schools of piranha, eating away at small pieces of other companies and simultaneously fragmenting and reconstituting the E&P sector, with most successful companies focusing their resources, operations and investments on a few attractive plays where an advantageous combination of geology, geography and economics provide attractive investment returns. 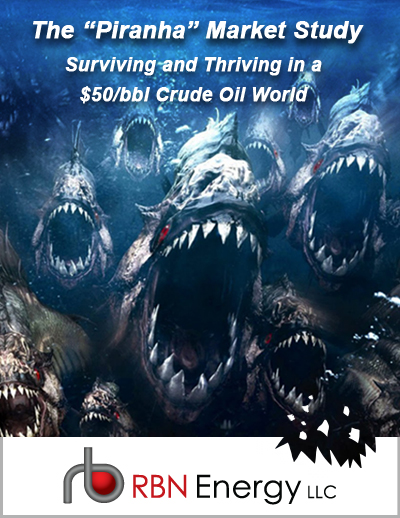 Piranha! The “Piranhaization” Of U.S. E&P

Concentration Of Assets, Targeted Acquisitions, And Strategic Divestitures Separate The Winners From The Losers In A $50/Bbl Crude Oil World

Piranha! is a market study about understanding this industry-wide transformation, identifying the companies best positioned for success, and predicting how the changes in U.S. E&P sector will continue to dominate the supply side of the supply/demand balance, not only in the U.S. but around the globe.

Click Here for More Information on our Piranha! Report

The Piranha! market study we’re highlighting today answers a number of important questions: How will this reconstituted E&P sector perform? Where will E&Ps invest? Which companies will be successful and which will fall by the wayside? And how will these companies impact world oil and gas markets?