Through the first half of the 2010s, U.S. production of field condensate — the ultra-light liquid hydrocarbon that bridges the gap between superlight crude oil and heavier natural gas liquids like natural gasoline — more than doubled, peaking at about 640 Mb/d in early 2015. As condensate production ramped up in the Eagle Ford and other plays, conde prices were discounted to move the product, markets were developed to absorb the barrels, and infrastructure was built to move the conde to those markets. Then, in a dramatic turnaround that continued into 2017, condensate production fell by more than one-third, the new markets — splitters and exports — were starved for product, and conde prices flipped from discounts to premiums. But the market is shifting yet again. Conde production is once more on the rise, with the Eagle Ford rebounding and production rising in the star of the show in crude oil markets: the Permian. Today, we discuss highlights from RBN’s new Drill Down Report on the condensate market roller-coaster.

In the half-century before the Shale Revolution, field condensates were a proverbial backwater of energy commodity markets, ignored and forgotten except by accountants who had to tabulate the few barrels produced. Most of those conde barrels never made it beyond a few miles from the lease — they were blended off into crude oil near the wellhead or at a nearby terminal. But with the Shale Revolution came expanded U.S. production of light and superlight crude (with API gravities of 40 to 50 degrees and 50 to 55 degrees, respectively) and their ultra-light cousin, field condensate, which has an API gravity of 55 to 70 or more. The Eagle Ford played (and continues to play) an outsized role; the South Texas production region for several years now has been churning out more than half of total U.S. output of field condensate. 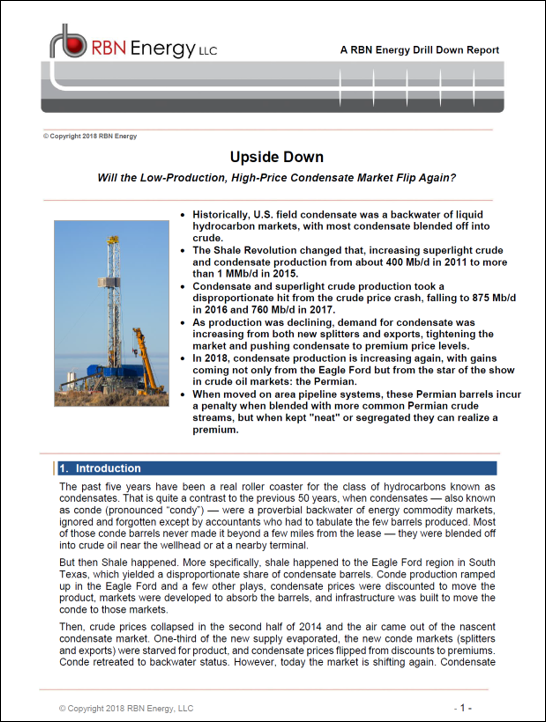 Upside Down: Will The Low-Production, High-Price Condensate Market Flip Again?

The past five years have been a real roller coaster for the class of hydrocarbons known as condensates. In the previous 50 years, condensates were a proverbial backwater of energy commodity markets. But then Shale happened — specifically, shale happened to the Eagle Ford region, which yielded a disproportionate share of condensate barrels. Conde production ramped up in the Eagle Ford and a few other plays, condensate prices were discounted to move the product, markets were developed to absorb the barrels, and infrastructure was built to move the conde to those markets. Then, when crude prices collapsed in 2014, the air came out of the nascent condensate market and conde retreated to backwater status. And now the market is shifting again. Condensate production is once more on the rise, with a big slice coming from the Permian. The big question is this: What happens next? In this Drill Down Report, we will review the U.S. condensate market, explore the drivers of conde production and examine the factors that could result in a renewal of neat condensate exports.

In 2013 and 2014, as production of conde continued rising in the Eagle Ford and other plays, supplies of 55-API-or-higher liquids exceeded U.S. domestic demand. Conde prices fell in relation to light-crude benchmarks West Texas Intermediate (WTI) and Louisiana Light Sweet (LLS) and, with the ban on most exports of U.S. crude (and field condensate) still in effect, new market outlets were needed for all of that price-discounted conde being produced. Two key markets emerged: (1) condensate splitters (very simple refineries that separate conde into mixed NGLs, naphtha and distillate), and (2) exports of processed condensate.