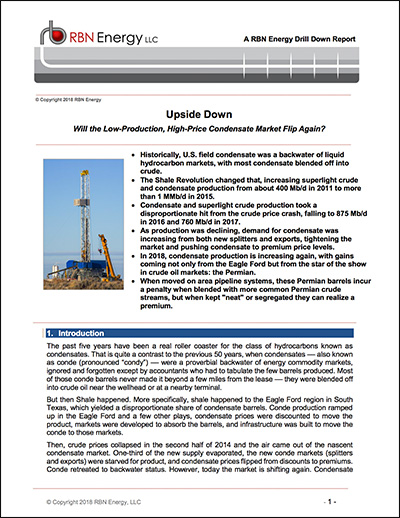 The past five years have been a real roller coaster for the class of hydrocarbons known as condensates. That is quite a contrast to the previous 50 years, when condensates - also known as conde (pronounced “condy”) - were a proverbial backwater of energy commodity markets, ignored and forgotten except by accountants who had to tabulate the few barrels produced. Most of those conde barrels never made it beyond a few miles from the lease – they were blended off into crude oil near the wellhead or at a nearby terminal.

But then Shale happened. More specifically, shale happened to the Eagle Ford region in South Texas, which yielded a disproportionate share of condensate barrels. Conde production ramped up in the Eagle Ford and a few other plays, condensate prices were discounted to move the product, markets were developed to absorb the barrels, and infrastructure was built to move the conde to those markets.

Then, crude prices collapsed in the second half of 2014 and the air came out of the nascent condensate market. One-third of the new supply evaporated, the new conde markets (splitters and exports) were starved for product, and condensate prices flipped from discounts to premiums. Conde retreated to backwater status. However, today the market is shifting again. Condensate production is once more on the rise, with a big slice coming not from the Eagle Ford, but from the star of the show in crude oil markets: the Permian.

The big question is this: What happens next? In this Drill Down Report, we will review the U.S. condensate market, explore the drivers of conde production and examine the factors that could result in a renewal of neat condensate exports.

Upside Down: Will the Low-Production, High-Price Condensate Market Flip Again? is included in RBN Energy’s 2018 Drill Down report series, a suite of reports covering many of the key issues expected to impact the markets for crude oil, natural gas and natural gas liquids. Drill Down reports are part of RBN Backstage Pass™ premium resources that also include Blog Archive Access, Spotcheck Indicators, Market Fundamentals Webcasts, Get-Togethers and more. By subscribing to RBN’s Backstage Pass™ Premium Services, you plug into our network and get direct access to our premium resources.

Download a preview of Upside Down: Will the Low-Production, High-Price Condensate Market Flip Again?