There simply is not enough petrochemical demand to absorb all of the ethane that the U.S. can produce.  The result is rejection - ethane sold as natural gas at fuel value rather than being extracted and used as a petrochemical feedstock. Today around 250 Mb/d of ethane is being rejected, and that number could increase by 200% over the next three years.  Yes, you read that right.  Rejection could triple.  As NGL production from the big shale plays increases, the U.S. petrochemical industry will not be able to use most of the incremental ethane - thus rejection.  But it may not play out that way.  All that ethane could be exported - perhaps as liquid ethane. Or is there another possibility: Spiking ethane into the soon to be exported volumes of LNG from terminals like Cheniere Sabine Pass, Freeport, ETP/Southern Union at Lake Charles and Dominion at Cove Point?  Today we continue our exploration into the possibility that surplus ethane could be exported in the form of “hot” LNG.

Part 1 of this series surveyed just how bad the ethane surplus is now, and how much worse (or better, if you are a petrochemical buyer)  it is going to get.  Basically that analysis updated the same ethane story we’ve been telling for nearly two years in blogs such as No Particular Place to Go, The Ethane Asylum and Dirty Deeds Done Dirt Cheap.  Figures #1 and #2 below provide a quick update.  As shown in Figure #1, ethane stocks ramped up to the 35 MMBbl range in May of 2012 and have been there ever since. Basically producers and gas processors are rejecting just enough ethane to stay even with petrochemical demand, so stocks stay flat – at very high levels.  The price signal that compels that rejection is shown in Figure #2.  The Mont Belvieu ethane price remains at or just below the price of natural gas at the Henry Hub, LA. For most natural gas processing plants around the country that means the netback price of ethane at the plant (destination price less the cost of processing, transportation and fractionation) is well below the price of natural gas on a BTU equivalent basis.  Thus it makes economic sense to reject.  As we covered in Part 1, RBN expects this situation to continue into the foreseeable future, even after new petrochemical capacity is built in the 2017-19 timeframe. 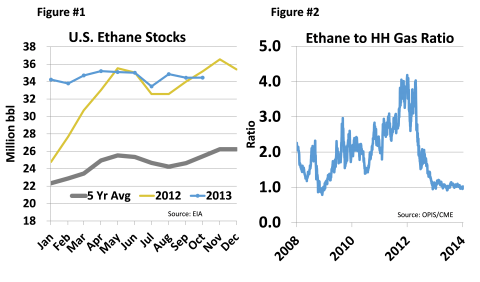 [Note: Late last week, OPIS reported a run-up in ethane prices of over a nickel per gallon.  Not sure what is happening there, but the ethane to gas ratio popped up to 1.2, the highest level in more than one year.]

There is a ready solution for surpluses of the other NGLs like propane and butane.  Put the barrels on boats and sell the surpluses into the global market.   As we discussed in Part 1, that does not work so well for ethane.  Ethane is notoriously difficult to export, both because of its physical characteristics (very low boiling point, very high vapor pressure) and because the facilities for exporting ethane do not exist.  Terminals used for exporting propane and butane can’t be used for ethane without extensive, expensive modification.  And even if export facilities are constructed, today there is essentially no waterborne trade in ethane.  The ships exist.  Ships used for petrochemicals like ethylene can be used for ethane.  But those ships are small and expensive.  All of these factors combined make for formidable barriers to liquid ethane exports. As noted in the Top Ten Energy Prognostications for 2014, we expect work to bring these barriers down to start in 2014 (see #4).  But it is going to take a lot of time, infrastructure and money to get there.  And there may be another, less expensive way to get U.S. ethane surpluses into the global hydrocarbon market.

That is to spike ethane into exports of liquefied natural gas – LNG.  It turns out that much of the LNG traded in world markets is “hot” anyway, meaning that it contains enough ethane and propane to increase the BTU value well above the average BTU content of U.S. pipeline quality gas.  Many international destination markets want and expect higher BTU content in their gas.  For example, even with higher BTU content Middle East LNG imports into Japan, some propane is regularly spiked into the gas to further increase the BTU content.  (They use propane because there is not much ethane handy.)

A few years back when it was expected that the U.S. would be importing a lot of LNG, there were concerns that ethane would need to be removed at the import terminals before the gas could be used in the U.S. market.  Now the prospect for exports has turned that problem on its head.  It would seem to be quite possible to simply add ethane to lower BTU content U.S. pipeline quality gas exports, effectively using LNG carriers to move the surplus ethane into world markets.  In those markets, LNG prices are much higher than either gas prices or the BTU equivalent ethane prices in the U.S.

Furthermore, it is certainly plausible that enough extra ethane could be spiked into US LNG exports to make it feasible that the same ethane barrels could be extracted on arrival at the destination market (in a gas processing plant) and used as a feedstock for ethylene crackers.  These days, crackers across the Far East and Europe are hungry for U.S. NGL feedstocks that could replace the high price naphtha feeds they are stuck with today.   In that way, U.S. producers get a new market for their ethane and ethylene crackers in the international market get cheaper feedstocks that will improve their economics.

So how much ethane could be exported in this manner?  We simply need to determine two primary variables to calculate the number.  First, the volume of LNG to be exported.  Second, the volume percent of ethane to be spiked into that LNG volume.  Given those inputs, calculating the ethane volume is just math.  Unfortunately we’ve found that getting these two simple variables pinned down is a lot more difficult than you might think, with responses from our network of experts fraught with subjectivity, complexity, and a lack of objectivity.

So rather than getting hung up with overly precise input variables, let’s just go through the math with some representative numbers.  Assume that the total volume of LNG to be exported is 6.0 billion cubic feet per day (Bcf/d).  That’s roughly 90% of the capacity of the four LNG export facilities that have been approved by the Department of Energy for exports to non-free-trade-agreement countries.  In effect, by using 90% of the volume we are haircutting the 6.0 Bcf/d number by 10% to account for maintenance and downtime of the facilities.

For the second variable, assume that we can spike 5% ethane into that 6.0 Bcf/d.  There can be a lot of debate around that number, and it could be much higher or lower, depending on your assumptions.  But let’s go with 5% for now.

A fragment of the spreadsheet for calculating the barrels of ethane is below.  The two input variables are in the colored cells.  Here’s how it works:

Note for geeks.  First, we know this is the long way around.  We could have just converted gas to barrels.  But we wanted to show the logic for the conversion.  Second, to keep this example simple, we are not calculating how many barrels of ethane it would take to get our mixture to some x% of ethane.  We are just assuming we can calculate 5% of the volume of LNG and then add that volume of ethane to the mixture.  Thus we are ignoring the content of ethane and other NGLs in both the gas to be blended with ethane and the content of ethane and other NGLs in the LNG to be shipped. More on the ethane percentage below. 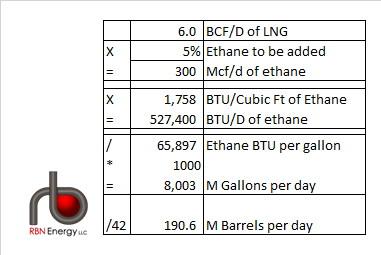 To access the remainder of The Gas is Hot Tonight – Spiking Ethane into LNG Exports – Part 2 you must be logged as a RBN Backstage Pass™ subscriber.